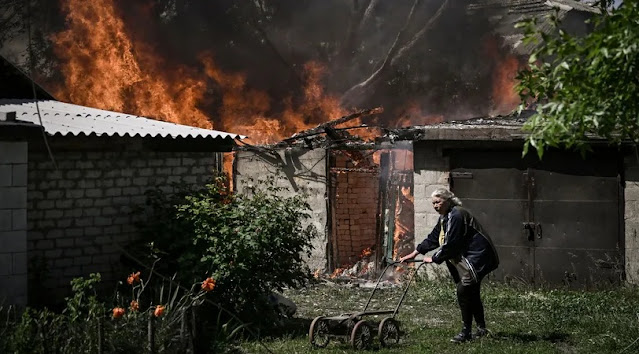 Russia's military has apparently advanced into one of the last free cities in the Donbass. France investigates war crimes reporter's death. Russian troops are said to be trying to storm several towns. Ground attacks were also reported from the Bakhmut area a little further to the west.

The situation in eastern Ukraine remains tense on the 97th day of the war. The "maximum combat capability of the Russian army" is now assembled in the Donbass, President Volodymyr Zelenskyy said in a video message. The Ukrainian general staff reported Russian "storming activities" in the area of ​​the towns of Sievjerodonetsk and Toshkivka. The fighting continued, according to the current situation report.

Russian troops advanced to Sievjerodonetsk on Monday. According to Luhansk governor Serhiy Hajdaj, they fought street battles with Ukrainian soldiers. He recommended that city residents stay in emergency shelters. He had previously announced that the city was about to be taken by Russia. The city has been the target of Russian attacks for months. It is considered the last point that the Ukrainian military still controls in the Luhansk region.

Ukraine is currently expecting a major attack on the center of its defense forces in Donbass. Sloviansk-Kramatorsk is the largest metropolitan area still under Ukrainian control. The high command of the armed forces in the east of the country is also stationed here. The EU countries have agreed on a compromise in the dispute over the planned oil embargo against Russia.

More than two-thirds of Russian oil supplies to the EU are to be subject to an import ban, as EU Council President Charles Michel announced during a summit meeting in Brussels at night. In addition, the Russian Sberbank is to be excluded from the financial communications network Swift and three Russian TV channels are to be banned. The EU also promised Ukraine further financial aid of up to nine billion euros. The money is intended to cover running costs such as pension payments and the operation of hospitals.

According to estimates by British secret services, Russia, with its intensified offensive in the Ukrainian region of Luhansk, must accept greater risks in other occupied areas. Russia made slow but greater progress at Luhansk than in earlier stages of the war as it concentrated its troops and weapons in a relatively small region, the UK Defense Ministry said in an update. The heavy shelling there is continuing, and street fighting is also believed to be taking place on the outskirts of the city of Sievjerodonetsk.

The focus on Luhansk means Russia is risking control of other occupied territories. In order to completely occupy the Luhansk and Donetsk regions, the Russians would have to take control of the important city of Kramatorsk and the main artery between Dnipro and Donetsk in addition to Sieryerodonetsk.

Russian Internet in Cherson and Zaporizhia

In the Russian-occupied regions of Cherson and Zaporizhia, Russian mobile and internet networks are now being used, according to Russian information. Oleg Kryuchkov, an adviser to the Russian-appointed government on the annexed peninsula of Crimea, told state news agency Ria Novosti that the territories are now exclusively using Russian internet. SIM cards for Russian mobile operators have already gone on sale.

Kryuchkov claimed a terrorist attack in the Ukrainian capital of Kyiv disrupted communications in the Kherson and Zaporizhia regions. Russia had come before that.

The pro-Russian separatists in Donetsk Oblast are said to have seized several merchant ships in the port of Mariupol. "Some of the ships come under the jurisdiction of the Donetsk People's Republic," said separatist leader Denis Puschilin, according to the Interfax news agency. The ships would be renamed and become part of a newly emerging merchant fleet.

The port was badly damaged during the fighting and the fairway was mined. According to Puschilin, the mines have now been cleared. The first ship with a cargo of 2,500 tons of metalhas now been sent to the Russian city of Rostov-on-Don. Ukraine had described the shipping of the metal as looting.

Fighting continues in eastern Ukraine. Russia is carrying out "assault activities" in the area of ​​the towns of Sieverodonetsk and Toshkivka, the fighting has continued, the Ukrainian General Staff said in its situation report.

Further Russian ground attacks were reported from the Bakhmut area a little further to the west. There, the Russian troops attacked the towns of Solote, Komyshuvahka, Berestowe, Pokrowske and Dolomitne. The situation report states that the attacks were unsuccessful, but would continue.

On other front sections, the night was quieter. The Ukrainian general staff reported only isolated fighting in the Sloviansk area, which is considered the center of troops loyal to Kiev in the Donbass. The Russian attack on the village of Dowgenke was repelled. Russia also suffered losses and withdrew when trying to explore new attack routes from the small town of Lyman, which was recently captured by the Russian military. The information could not be independently verified.

Other events of the night:

President Volodymyr Zelenskyy accuses the Russian government of deliberately wanting to use the trade blockade to bring about a global hunger and migration crisis and thus destabilize the West.

According to him, 22 million tons of grain already stored in Ukraine for export cannot leave the country because of the Russian port blockade. He warned that this would mean starvation in countries in Africa, Asia and Europe, which in turn could trigger migration.

Three civilians were killed by Russian shelling in the Donetsk region, Governor Pavlo Kyrylenko said on Telegram. According to the online newspaper Ukrajinska Pravda, a man was killed by Russian shells in the Kharkiv region. According to the Tass agency, Russia claims that Ukrainian shelling killed two civilians in the Donetsk and Luhansk regions. This information has not been independently verified.

After the death of a French war reporter in Ukraine, the anti-terror prosecutor's office is investigating possible war crimes. The investigations were started, among other things, because of an intentional attack on the life of a person protected by international law, as reported by the French news agency AFP. TV journalist Frédéric Leclerc-Imhoff died near Sievjerodonetsk in eastern Ukraine on Monday while accompanying a humanitarian evacuation. The 32-year-old reporter was hit by shrapnel. It was his second mission to Ukraine since the beginning of the war.

The Russian-installed president of the Georgian region of South Ossetia, which has been occupied since 2008, has canceled a planned referendum, saying it violates Moscow's "legitimate interests". Not the residents, but the Russian government will decide whether or not to join Russia.