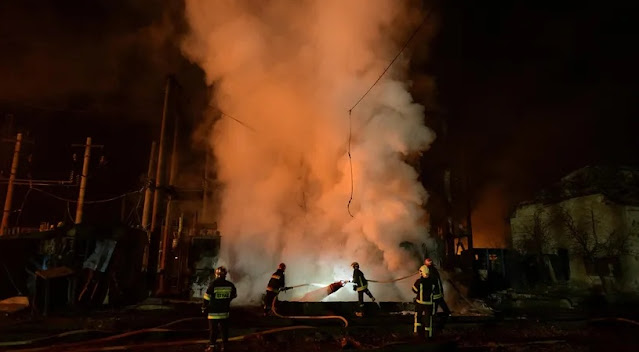 Russia fired long-range missiles at several train stations in Ukraine last night. "Six railway substations near Pidbirtsi, Lviv, Volovets, Tymkove and Pyatikhatka stations, through which arms and ammunition were transported from the United States and European countries to Ukrainian troops in Donbass, were destroyed," the Russian Defense Ministry spokesman said Igor Konashenkov, with. Russian Defense Minister Sergey Shoigu is quoted as saying by the Ria Novosti news agency that the Russian military will regard NATO arms transports in Ukraine as targets to be destroyed.

In addition, 40 military targets in Ukraine, including four ammunition depots, are said to have been hit. The Russian troops shelled around 500 targets with artillery units, including command and base points, depots and troop concentrations. More than 300 Ukrainian soldiers were killed. Several Ukrainian artillery positions and air defense systems were knocked out by Russian missiles.

Russia recently stepped up its attacks on Vinnytsia, Odessa and the western part of the country. The Transcarpathian region on the border with Hungary was also hit for the first time. In Lviv, where many refugees from the east have found a safe haven, there were also siren alarms and several explosions. Three power plants were damaged by missiles, causing power outages in several neighborhoods. As a result, according to the authorities, there were problems with the water supply because the pumps failed.

The Ukrainian government attributes the increased bombing to the successes of its army. Ukrainian troops are said to have recaptured eleven villages in the east near Kharkiv that Russia had occupied for more than two months. The US believes that the Ukrainian army drove back the Russian troops about 40 kilometers. As a result, they would have fewer opportunities to shell Ukraine's second largest city with artillery.

Militarily, Russia is apparently also stepping up its attacks in the east. According to the British Ministry of Defence, the troops are trying to advance in the north of the Donbass. Accordingly, 22 tactical battalion groups were deployed in the strategically important city of Izyum. Each of these units normally consists of about 700 soldiers.

The aim is probably to conquer the cities of Kramatorsk and Sievjerodonetsk and to encircle Ukrainian troops in the Kharkiv region. According to the information, the Russian forces are only making slow progress because Ukrainian soldiers have entrenched themselves and are firing at the attackers with long-range weapons.