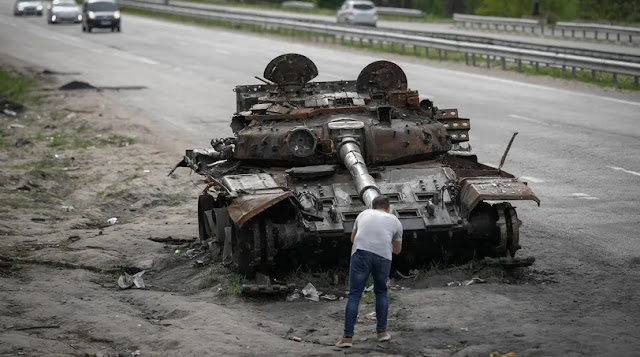 In Mariupol, the last Ukrainian soldiers surrendered. President Volodymyr Zelenskyj calls for a global fund for victims of Russian attacks.

In the southern Ukrainian port of Mariupol, which had been under siege for months, the last Ukrainian soldiers have surrendered to the Russians. The Azov steelworks was "completely liberated," the Russian army reported. The last 531 Ukrainian fighters surrendered, said Igor Konashenkov, spokesman for the Russian Defense Ministry. As a result, the strategically located city on the Azov Sea is now completely under Russian control.

Ukrainian President Volodymyr Zelenskyy expects that Russia's military will now concentrate more on conquering the Donbass region in the east of the country. During the night he called on the West and other friendly states to set up a fund for victims of Russian attacks together with Ukraine.

"Anyone who has suffered from Russia's actions" must be able to be compensated for losses suffered, Zelenskyj said. The fund could be regulated in a multilateral agreement and draw in part from Russian capital and property frozen or confiscated abroad, Zelensky said.

After the final loss of the port city of Mariupol, Ukraine fears a further advance of Russian troops in the east of the country. The Ukrainian military governor Serhiy Hajday reported massive fighting in the Donbass, including in the city of Sieverodonetsk.

The Russians wipe out both Sieverodonetsk and Mariupol. Fighting is going on in the suburbs of the city

The governor announced on the Telegram news channel that the region was being bombed from the air. Russia wants to reduce the area to rubble and ashes. Ukrainian authorities also reported fresh Russian attacks in the eastern Ukrainian city of Kharkiv. The market there had been shot at yesterday evening. Several merchant pavilions burned down. The published photos of the heavy destruction were initially not verifiable.

Finland no longer gets gas from Russia. "Gas imports through the Imatra entry point have been stopped," announced Finnish grid operator Gasgrid. Russian gas destined for Finland usually arrives at the Imatra station. The Finnish state-owned company Gasum also confirmed the delivery stop. The company announced that from now on it will supply its customers with gas flowing through the Balticconnector pipeline from other sources. The pipeline connects Finland with neighboring Estonia.

According to Gasum, the Russian gas company Gazprom had announced that gas would no longer flow from 6 a.m. today. The reason is that Gasum refused to pay bills in rubles in the future. However, Gasum has carefully prepared for such a situation and will be able to continue to supply all customers in the coming months.

According to the Russian government, the last Ukrainian soldiers have surrendered in the port city of Mariupol and abandoned the Azov steel plant. The city on the Azov Sea is now under Russian control. Ukrainian President Volodymyr Zelenskyy spoke out in favor of a fund for victims of Russian attacks. He proposed a multilateral agreement between Ukraine, the West and other friendly states.

Russian troops are said to have attacked a cultural center in eastern Ukraine. According to the Ukrainian president, seven people were injured, including a child. The information cannot be independently verified.

Great Britain wants to supply the Republic of Moldova with new defense weapons. That writes the newspaper The Telegraph, citing British Foreign Secretary Liz Truss. The weapons are intended to deter Russia from a possible attack.

Russian authorities have classified Kremlin critic Mikhail Khodorkovsky and former world chess champion Garry Kasparov as "foreign agents," according to the Tass state agency. The reason given was that both were involved in political activities and were financed by Ukraine and the USA.

Germany is stepping up its cooperation with the Ukrainian Ministry of Education in order to make it as easy as possible for war refugee children to obtain a school leaving certificate that is recognized in their home country. This is reported by the Augsburger Allgemeine.

Rating agency Moody's lowered Ukraine's credit rating by another notch to Caa3. The reason is "a longer-lasting military conflict than Moody's had initially expected". The agency also added a negative outlook to the new credit rating – so further downgrades could follow.