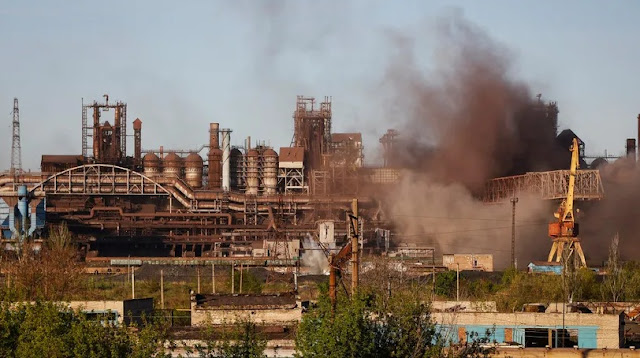 Azov steel was recently heavily shelled. Ukraine assumes that Russia wants to capture the last Ukrainian bastion in the city by May 9.

After women, old people and children left the Azov steelworks in Mariupol, Ukraine fears heavy fighting between the soldiers who are still entrenched there and the Russian troops. The Ukrainian general staff announced that the units in the steelworks area were still surrounded. There are Russian attacks with "support of artillery and tank attacks".

"The enemy is trying to finish off the defenders of Azov Steel, they are trying to do it before May 9 as a gift to Vladimir Putin," said Oleksiy Arestovych, adviser to Ukrainian President Volodymyr Zelenskyy. Russia celebrates the Soviet Union's victory over Nazi Germany with a traditional military parade in Moscow on May 9, which is now mainly used for propaganda purposes.

Hundreds of soldiers have holed up in the industrial complex, which is the last bastion of the Ukrainian military in the devastated port city of Mariupol. Should the steelworks eventually fall, the Russians would have taken the strategically important port city entirely, which would be an important symbolic achievement for the Kremlin.

Many residents of the city in south-eastern Ukraine, which had been under siege for weeks, had sought refuge in the tunnels and bunkers of the steelworks.

Zelenskyj spoke on Saturday evening in a speech of 300 people who had been evacuated from the steel mill. It is a "second phase" of evacuations in preparation for "the injured and medical personnel". The government is "of course also working to get our soldiers out. All these heroes defending Mariupol," Zelenskyy added, without giving any figures. "It's extremely difficult. But it's important."

The Kremlin's declared goal is to establish a land connection between the Black Sea peninsula of Crimea, annexed in 2014, and the eastern Ukrainian regions of Luhansk and Donetsk controlled by pro-Russian separatists.

This requires taking Mariupol, which failed when the separatists attacked in 2014. So far, Kherson is the only important Ukrainian city that is completely under Russian control. The Ukraine recently formulated the recapture of the city as an interim goal.