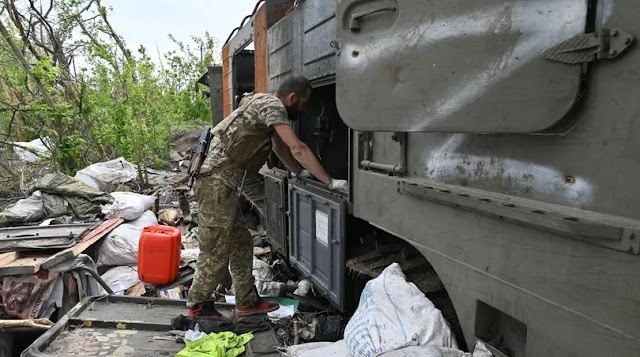 The Russian army has withdrawn from Kharkiv. After the defeat at Kyiv, this is the second time that Russia has had to give up one of its major war goals.

After Kiev, the Ukrainian army has won a second important battle against the Russian invaders, the battle for the city of Kharkiv in eastern Ukraine. According to a statement from the Ukrainian military, Russian troops who had been trying to conquer Kharkiv for weeks are withdrawing.

The city is still under artillery and bomber fire, but the ground units have been pushed back by the defenders and are retreating. Ukrainian President Volodymyr Zelenskyy said in his evening video address that six Ukrainian towns and villages in the region had been recaptured over the previous day. Western observers also confirm that Russia is attempting an orderly withdrawal on this front. Once again, the Russian army has not achieved one of its declared war aims.

Kharkiv had been the target of a strong Russian advance since the beginning of the war. The second largest Ukrainian city is closer to the border with Russia than any other major city in the country. Historically, Russia considers them property - it was from there that Soviet troops crushed attempts to establish an independent republic in Kyiv during the First World War. That was a long time ago, but Vladimir Putin referred to it in one of his statements on the war.

After just a few days of the war, Russian units had entered the city, and the city area has also been bombed continuously since the beginning of the war. The population has been living in basements and subway shafts for weeks. Hundreds of people were killed and thousands of buildings destroyed.

Since then, however, Ukrainian soldiers have been able to push the attackers back further and further. At the beginning of May, the first eastern suburbs were recaptured, and a few days ago the Russian attackers hardly put up any resistance to the Ukrainians. Ukraine now controls the entire area around the city again. The fact that they could not conquer Kharkiv is not just a symbolic loss for the Russian army.

The encirclement attempt seems to have almost failed

The Russian military is also dependent on the railway connections in Ukraine for its advance plans. Only through them could the attackers advance quickly and, above all, quickly deliver supplies for the troops. The difficult terrain and the limited transport capacity by truck are major problems for Russia's military. Kharkiv is an important railway junction. Control over it would have greatly strengthened Russia's attempt to encircle Ukrainian troops in nearby Donbas.

The withdrawal therefore also shows how critical the situation is for Russia. It also appears to be used to route the withdrawing troops to reinforce the battalion groups involved in the encirclement attempt.

They are still fighting at several points like Izyum and at Sieverodonetsk to break through the Ukrainian positions there. So far they have not succeeded. The fact that Kharkiv is abandoned gives the impression that the encirclement attempt has almost failed.