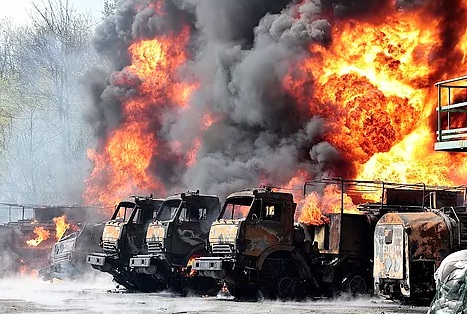 Russia acknowledges that Western support for Ukraine prevents Moscow from "quickly" completing the offensive in the war in Ukraine.

On the 70th day of the war in Ukraine, Russia has reported a heavy blow to the Ukrainian forces. Overnight, Russian artillery has hit multiple Ukrainian positions and strongholds in the war in Ukraine, killing 600 Ukrainian fighters. Russia's Defense Ministry has also said its missiles destroyed aviation equipment at the Kanatovo airfield in Ukraine 's central Kirovohrad region and a large ammunition depot in the southern city of Mykolaiv.

Ukraine has a "crucial" need for multiple launch rocket systems

The head of the Ukrainian armed forces said Thursday that his country needs multiple launch rocket systems to defend itself against the Russian army in the war in Ukraine. General Valeriy Zaluzhnyi has said that Russia has resumed its cruise missile attacks. "Therefore, the issue of providing Ukraine with multiple launch missile systems like the M142 HIMARS (High Mobility Artillery Rocket System) and the M270 MLRS is crucial," he said.

Ukrainian President Volodimir Zelensky announced Thursday the launch of an online crowdfunding platform designed to help Kiev win the war against Russia and rebuild the country's infrastructure. "In one click you can donate funds to help our defenders, save our civilians and rebuild Ukraine", he has assured in a video posted on Twitter in which he makes this announcement in English.

Russia has announced this Thursday the expulsion of seven Danish diplomats in response to a similar measure adopted by Copenhagen on April 5 against 15 diplomats stationed in Denmark.

Russian forces continue to comply with President Vladimir Putin's order not to storm the Azovstal steel mill during the war in Ukraine, the Kremlin said Thursday. "The Ukrainian side, especially those who take refuge on the territory of the plant, are well known for continuously producing a large number of lies and fakes. Therefore, the information that comes from them must be filtered in the most exhaustive way. "said the spokesman for the Russian presidency, Dmitri Peskov.

Russia intensifies its attacks in Donbas

The Russian Army has intensified its attacks in different parts of Donbas, in eastern Ukraine, which left at least two dead and 25 wounded, according to Ukrainian sources. A missile hit the town of Kramatorsk, hitting nine residential buildings, a school and other civilian targets, Donetsk regional head of administration Pavlo Kyrylenko said.

There were also attacks in other towns in the region, including one against a residential area in the town of Avdiivka. Attacks against two municipalities in that province in eastern Ukraine were also reported from Sumy, according to the Ukrinform portal. Ukrainian Army sources claim to have regained control of several communities on the borders of Nikolaev and Kherson, in territory occupied by Russian troops.

Ukrainian refugees after the Russian invasion rise to 5.7 million

The Ukrainian exodus after more than two months of Russian invasion amounts to 5.7 million, according to data updated daily by the United Nations Refugee Agency (UNHCR). The main initial destination of this exodus is Poland, where arrivals of Ukrainian citizens exceed 3.1 million, followed by Romania (854,000, many of them having previously passed through Moldova) and Russia (714,000), according to UNHCR figures. In the first five days of May, 171,160 Ukrainians have fled from Ukraine.

ACNUR also highlights that 1.43 million Ukrainians have re-entered their country since the outbreak of the war , although it clarifies that these movements cannot yet be considered a consolidated return of refugees, since many of them only enter punctually Ukraine to then go back out.

The President of the European Council, Charles Michel, has spoken in favor of the confiscation of Russian assets frozen in the European Union under sanctions, for use in the reconstruction of Ukraine, according to an interview published on Thursday.

"I am absolutely convinced that it is extremely important not only to freeze the assets, but also to make their confiscation possible, to make them available to the country that is rebuilding itself," he said in an interview with the Interfax-Ukraine news agency. "This is the first time that the president [of the European Council] has spoken about the confiscation of Russian assets," Michel's spokesman told AFP.

US President Joe Biden asked Congress in late April to give him the ability to seize the assets of sanctioned Russian oligarchs in the US, to use for the benefit of Ukraine.