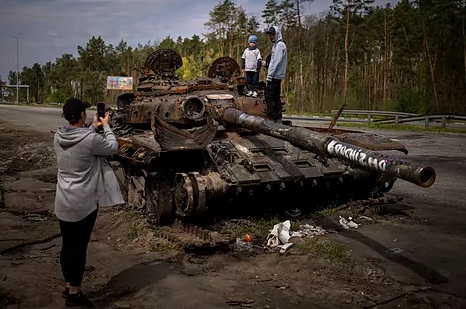 A succession of "serious and notable tactical failures" have decimated the Russian air force in Ukraine, according to a report by British military intelligence released on Thursday. The first big fiasco occurred at the beginning of March and a few days after the start of the invasion, with the occupation and subsequent withdrawal of the Hostomel airfield near kyiv, which would have been vital for the assault on the Ukrainian capital.

The report also highlights the stagnation since April in the advance in the Donbas region around the city of Izium, as well as "the failed and costly" recent attempts to cross the Siverskyi Donets river, also in the east of the country.

"Russian doctrine has been to assign the most demanding operations to the VDV (air force), made up of 45,000 well-paid, contracted professional soldiers," warn analysts at the British Ministry of Defence, who blame the "complacency" of senior commanders of the large number of casualties that have occurred in the "elite units".

According to experts, the Russian army did not gauge the size of the Ukrainian resistance from the outset and made tactical errors that resulted in a slowdown, a standstill and the subsequent withdrawal of troops on several fronts. "The air forces were used in missions more appropriate for ground infantry, hence the heavy losses suffered," the report concludes. "The modest results of the VDV in Ukraine reflect strategic mismanagement of Russia's ability to secure air superiority."

Analysts highlight how the Russian military's "significant investments" in the air force over the last 15 years have resulted in "an imbalance" with the ground army that is coming to light in the invasion of Ukraine. The Russian air forces have also suffered a symbolic and moral blow in the last week with the death in action of war veteran General Kanamat Botashev, 63, at the controls of his Su 25 fighter. The plane was shot down by a Singer missile Ukrainian on Sunday at 8.25 in the morning. His death brings to ten the number of Russian generals killed in Ukraine.

The casualties of the Russian army in three months of battle already far exceed the 15,000 killed in the Soviet invasion of Afghanistan that began in 1979 and lasted for almost a decade. According to British intelligence, the high number of Russian soldiers killed in combat (estimated by the Ukrainian army at 28,700) is due to several factors.

"It is a combination of tactical errors, limited air cover, lack of flexibility and a rigid attitude in the controls that has led to repeated errors," say the British experts, who highlight the personal involvement of President Putin in the movements of troops in eastern Ukraine.

Since the beginning of the war, the British and American intelligence services have joined forces and have decided to "declassify" a large part of their reports on the Russian army, in a parallel war of military propaganda without precedent in the conflicts of recent decades.