Russia-Ukraine Conflict: Azovstal Resistance Surrenders After Running Out Of Ammunition | A Court Will Decide The Fate Of The Ukrainian Fighters | 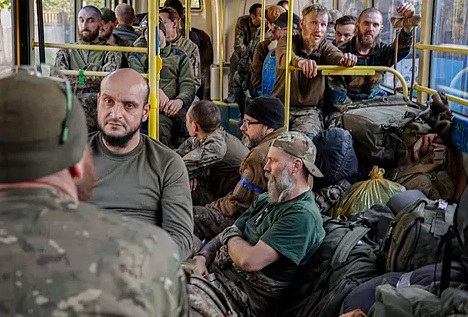 Almost 1,000 soldiers had not eaten or slept for days, purifying water from the blast furnaces and reusing the bandages of the dead on the bodies of the living

In the last few days, their faces had changed from flesh to yellow, the color of the Ukrainian flag along with the sky blue that they stopped seeing to plunge into the tunnels of the great Mariupol steelworks. Almost 1,000 soldiers had not eaten or slept for days, sick with fatigue and 20 kilos lighter, drinking water from the blast furnaces and reusing the bandages of the dead on the bodies of the living. Some had sharpened the edges of their trench shovels to use as axes against the Russians in the final assault.

The last few days had measured each bullet: one shot, one man, but they no longer had ammunition left despite the fact that they fought mutilated, like officer Ilya Samoilenko, who shot with a grappling hook attached to his stump. Today the Russians have agreed to evacuate the most seriously wounded to the area occupied by Moscow. The rest of the garrison has surrendered.

The last defenders, who had already said goodbye to their families thinking of a fatal outcome, left the plant unarmed, already at first light, single file. They were frisked by a Russian military checkpoint without saying a word, taking the last wounded with them. At least before the cameras, there was no sign of abuse or harassment and several Russian doctors treated them right there with first aid. Then they boarded some buses marked Z in black. The war, wherever they go, is over for them. The Russian Defense Ministry said the Ukrainian soldiers were evacuated after "laying down their arms and surrendering" and are now "prisoners of war".

Russian Defense Minister Sergei Shoigu assured that Moscow would comply with the Geneva Convention with Ukrainian defenders, including with members of the Azov Regiment, one of the targets of Russian propaganda for its controversial founding at the hands of far-right members in 2014, an ideal excuse for the Russian war of "denazification" despite the fact that today this group is integrated into the army, made up of soldiers of different ideologies, already far from the ideology of its origins at the express request of Joe Biden to Zelensky himself.

"Save the life". That is the only order that Defense Minister Oleskii Reznikov has given to the defenders of Azovstal "after their mission has been fulfilled: to contain a group of 20,000 Russian invaders and prevent them from advancing in the direction of Zaporizhia and Donetsk. They are all heroes ." Thus, after almost three months of carnage and destruction, the battle of Mariupol ends, the bloodiest to date in Vladimir Putin 's war of aggression, which finally scores its first victory, albeit a pyrrhic one, at a cost of thousands of lives of Russian soldiers, hundreds of armored vehicles and tens of thousands of civilians, many buried in gardens or under the rubble of civilian buildings such as the theater or maternity bombed by Russia. Now Moscow will rule over the ruin it has helped create. With the end of the fighting, Putin manages to seize access to the Sea of ​​Azov from Ukraine and seize the last hole in the belt that clasps Crimea with Donbas, that is, what Kremlin nationalism calls "New Russia province"

Previously, the Russian assailants had allowed the exit, in the middle of the night, of the 53 most serious. Carried on a stretcher to some buses, there was not a single Ukrainian soldier who preserved all the members of his body. For 15 of them, who have died from their injuries in recent days, the evacuation came too late and they will never leave the steelworks.

The Ukrainian resistance in the port city, which has played a decisive role in the war by fixing thousands of Russians in Mariupol that Moscow would have needed in other areas, will have to adapt to the new situation. The defeat in Mariupol is difficult to reverse except for the collapse of the Z troops on all fronts, something that some military analysts do not rule out due to the enormous wear and tear to which Ukraine has subjected the assailants, pushed in Kiev, shaken in Kharkov and collapsed. after weeks of gridlock in the Donbas.

Now Russia will be able to send the troops left over from the taking of Mariupol to areas where its offensives are hanging by a thread without the necessary levy to cover casualties, which Putin is reluctant to ask, since that would mean having to officially declare war.

The pro-Russian separatist leader of the self-proclaimed Donetsk republic, Denis Pushilin, said today that the heads of the Ukrainian military surrounded in the Azovstal steelworks in Mariupol still remain in their facilities. "No top-level commanders have come out so far," Pushilin was quoted as saying by the Donetsk news agency. On Tuesday, another 694 Ukrainian servicemen left the metallurgical plant, bringing the total number of defenders who "surrendered" according to Moscow since Monday to 959.

Among the evacuees there are a total of 80 wounded, 51 of them seriously and who had to be admitted to the hospital in Novoazovsk, a town controlled by Russia in the self-proclaimed people's republic of Donetsk. Kiev hopes to be able to exchange these soldiers for Russian prisoners, but Moscow has not yet talked about this possibility and instead the State Duma (Lower House) is urgently processing a resolution today that would prohibit an exchange with "Nazi criminals", as Russia describes to the nationalist fighters of the Azov battalion.

These defenders have been fully integrated since 2014 into the National Guard of Ukraine. Pushilin indicated today that a court will decide on the fate of the Ukrainian militants who left Azovstal. "As for the war criminals, as well as those who are nationalists, their fate, if they lay down their arms, should be decided by the military court," he noted.

According to Pushilin, not only commanders are considered "war criminals", but also those who carry out their orders and "carry Nazi ideology in their actions and deeds, especially against the civilian population". The Russian Investigative Committee also said the day before that it will question the soldiers who left the steel mill.

"Investigators will interrogate the militants who were hiding at the Azovstal plant in Mariupol in the framework of the investigation of criminal cases related to the crimes of the Kiev regime against civilians in Donbas," the Committee's press office said, according to the official agency TASS.

According to this body, which reports directly to Russian President Vladimir Putin, the investigators "will identify the nationalists, verify their participation in crimes against civilians, and the information obtained will be compared with other information available in the case materials."