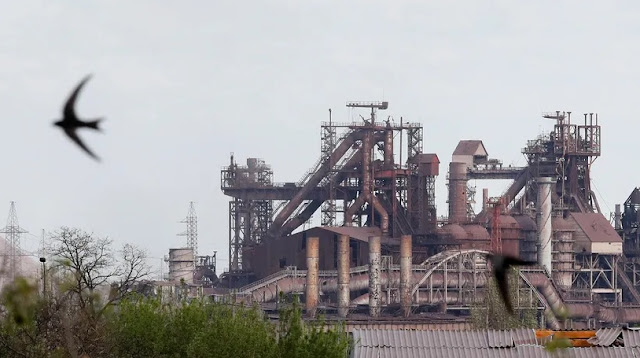 Around 22 civilians escape from steel plant in Mariupol

Ukraine has managed to evacuate 22 people from the besieged Azov Steelworks. Hundreds of soldiers, women and children are still trapped.

According to Ukraine, 22 civilians have been able to leave the fiercely contested Azov steelworks in the port city of Mariupol. According to Russian information, there are even 46 people who were evacuated. They were taken to an agreed place and from there they were to continue to the Ukrainian-controlled city of Zaporizhia, Azov regiment deputy commander Svyatoslav Palamar said in a video published on Telegram.

"We are using ropes to pull civilians out of the rubble - women, children and the elderly," said Ukrainian fighter Sviatoslav Palamar. Russian news agencies had previously reported 25 people.

The factory premises were shelled by Russian artillery throughout the night, said the deputy commander of the regiment defending the steelworks. A ceasefire that had been agreed for 6 a.m. on Saturday only began five hours later. The Azov regiment is searching the industrial site for more civilians and hopes they can be taken to safety as well, Palamar said. For the time being, however, there are no plans to evacuate the injured.

The steelworks site is the last bastion of the Ukrainian resistance in Mariupol, which was largely destroyed by Russian attacks. Hundreds of Ukrainian soldiers and civilians, including dozens of children, are said to be holding out in catastrophic conditions in the complex with extensive underground tunnel systems. Russia, on the other hand, speaks of around 2,500 Ukrainian fighters and foreign mercenaries who are also said to have holed up there. So far, no evacuation action from the Azov steelworks had been successful.

During a visit to Kyiv on Wednesday, UN Secretary-General António Guterres said the United Nations was doing everything it could to facilitate the evacuation of civilians from the steelworks. Russia declared last week that, with the exception of the steel works, it had gained complete control over the strategically important port city. Kremlin chief Vladimir Putin then ordered a siege of the industrial site.

At the Azov-Stahl steel works in Mariupol, from which some civilians were evacuated over the weekend. The UN said the operation was in progress and was being coordinated with the International Committee of the Red Cross (ICRC) and the conflicting parties Russia and Ukraine.

A convoy to rescue the civilians started on Friday and reached the port city surrounded by Russian troops on Saturday morning. For security reasons, more details about the evacuation action could be given not be made. According to Russian information, 40 civilians were evacuated from the steelworks on Sunday alone. The Reuters news agency reported 14 other evacuees in the afternoon.

Several people are said to have been killed in a Ukrainian attack on the headquarters of the Russian army staff in the city of Izyum. Among them are allegedly high-ranking officers, an adviser to Ukraine's interior minister reports on Telegram . Izyum is in eastern Ukraine and has a population of around 50,000.

According to Ukrainian sources, Russian Chief of Staff Valery Gerasimov is in Izyum to command the offensive in Donbass. Ukraine is said to have already attacked on Saturday. Russia has not confirmed the reports, and the information cannot be independently verified.

In the midst of discussions about Sweden's possible accession to NATO, a Russian reconnaissance aircraft entered Swedish airspace without permission. The AN-30 propeller aircraft temporarily violated Swedish airspace on Friday evening, the army said. The Ministry of Defense in Stockholm condemned the incident as "completely unacceptable".

Especially in view of the "general security situation", the airspace violation is "very inappropriate", said Defense Minister Peter Hultqvist on the SVT television station. "Sweden's sovereignty must always be respected." His country will lodge a protest through diplomatic channels. At the beginning of March, four Russian fighter jets briefly violated Swedish airspace.

Denmark also responded to the incident by inviting the Russian ambassador to the Foreign Ministry for an interview. According to information from the Swedish ministry, the Russian plane also flew over Danish territory. Foreign Minister Jeppe Kofod, in line with Sweden, called the flight "completely unacceptable".

The new incident came at a time when Sweden, like Finland, was intensively discussing joining NATO in view of the Russian war of aggression against Ukraine. According to Swedish media reports, both countries could submit their application for membership together - possibly as early as mid-May. The heads of state and government of the 30 NATO countries could then theoretically discuss this at their summit meeting at the end of June.

Like Finland, Sweden is not a NATO member, but acts as a close partner of the military alliance in Scandinavia. Russia has repeatedly warned both countries about the "consequences" of joining NATO.