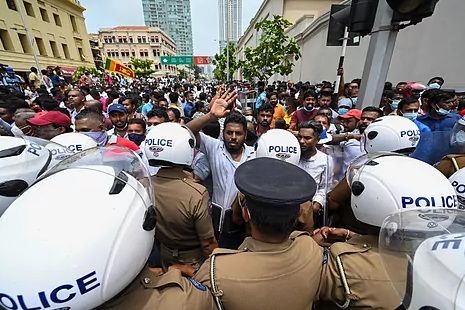 At least five people died in clashes in the streets. Although the prime minister resigned, hundreds of protesters tried to enter his house, for which he had to be evacuated.

In a matter of weeks, the tranquility has been definitively shattered in this small island country in South Asia. The serious shortage of food, fuel and medicine has generated enormous discontent among the population, which blames the powerful Rajapaksa clan for the crisis.

On Tuesday, Sri Lankan authorities deployed thousands of soldiers and police to enforce a nationwide curfew after five people were killed in renewed protests.

The violence, which also left nearly 200 injured , led to the resignation of Prime Minister Mahinda Rajapaksa, but that did nothing to stem the outrage of protesters, who tried to force their way into his official residence. Heavily armed troops had to come to his rescue as protesters had breached the main gate of his residence in Colombo and were trying to enter the building where Rajapaksa and his family had taken refuge. "Following an early morning operation, the former prime minister and his family were evacuated to a safe place by the army," a senior security official said. "At least 10 Molotov cocktails were thrown at the complex," he added.

The power of the Rajapaksa clan is reeling after months of blackouts and product shortages on this southern Indian island of 22 million, which is facing its worst economic crisis since independence in 1948.

"THEY BEAT US, THEY BEAT THE WOMEN AND CHILDREN"

Despite incessant calls to resign, President Gotabaya Rajapaksa (brother of the former Prime Minister) remains in office and controls the security forces. On Friday, he declared a state of emergency to strengthen his powers.

After weeks of largely peaceful anti-government protests, violence took to the streets of Colombo on Monday as supporters of Mahinda Rajapaksa (who was also president from 2005 to 2015) attacked opposition protesters with sticks and clubs. "They beat us, they beat the media, they beat women and children," said a witness asking not to be identified.

Police fired tear gas and water cannons to disperse the crowds and declared an immediate curfew in the capital that was later extended to the entire country. The authorities indicated that it will remain until Wednesday morning, until then public and private offices, shops and schools will be closed.

Still, protesters defied the curfew to take revenge on pro-government militants. Dozens of houses of Rajapaksa faithful were burned, as well as cars, buses or trucks in and around Colombo. At the Prime Minister's residence, the police had to launch tear gas canisters and fired warning shots to contain the crowd trying to gain access to the compound.

Mahinda Rajapaksa said he was resigning to pave the way for a unity government. But it was not clear whether the opposition would join a new executive since he has in the past refused to ally himself with any member of the extended family. Under Sri Lanka's political system, even in a unity government, the president retains the power to appoint and dismiss ministers and judges and enjoys immunity from prosecution.

For months, this small island country in South Asia has suffered from severe shortages of food, fuel and medicine.

The economic collapse began to be felt after the coronavirus pandemic cut off income from tourism and remittances and led the government to ban numerous imports to prevent the flight of foreign currency. The enormous external debt, estimated at 51,000 million dollars, led the government to decree a payment moratorium on April 12.