China: New Evidence Of Internment And Torture Of Uyghurs 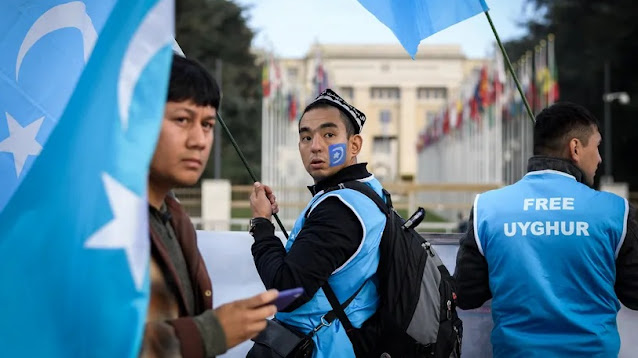 Shortly before the visit of UN Human Rights Commissioner Michelle Bachelet to Xinjiang, China, several media outlets published further evidence of the mass internment of Uyghurs in the region. According to this, photos, speeches and official instructions prove that the camps are not – as claimed by the Chinese government – ​​“professional training institutions”. The Bayerischer Rundfunk (BR) and the Spiegel were involved in the research.

According to the reports, the dataset includes a previously unknown speech by the former party leader of the Xinjiang region in 2017, which said that any prisoner who tried to escape even a few steps was to be "shooted". Pictures showed security forces with assault rifles. A photo also shows a prisoner in a so-called tiger chair - a torture device in which the legs are overstretched.

The Chinese embassy in the US said the measures in Xinjiang were aimed at countering terrorist activities and that it was not about "human rights or a religion". For years, China has denied allegations that it intends to deprive the Uyghur minority of their freedom and culture by detaining them in "training camps".

The dataset was reportedly leaked to German anthropologist Adrian Zenz. This is a well-known China researcher in the USA who pointed out the alleged human rights violations in Xinjiang early on and was sanctioned by the government in Beijing in 2021. He shared the data with a total of 14 Western media outlets.

The head of the European Parliament's delegation for relations with China, Reinhard Bütikofer (Greens), called for new sanctions against China as a result of the latest reports. The "images of horror" should lead to the European Union taking a clear position, he told BR and Spiegel.

UN Commissioner Bachelet is expected to visit the cities of Urumchi and Kashgar in Xinjiang this Tuesday and Wednesday . There, China is said to have interned more than a million Uyghurs and members of other Muslim minorities in the region in the far west of the country. The people have to do forced labor, and many are said to have been forcibly sterilized. The authorities are also destroying cultural sites; the entire region is closely monitored. The US speaks of a genocide. According to sources in Washington, DC, Bachelet will probably not get an "unmanipulated" picture of the situation.

In the past few weeks, foreign Uyghur women have held rallies and urged Bachelet to visit relatives who are being held in Xinjiang. Many have lost all contact with family members for years.