Russia-Ukraine Conflict: "Rapid Withdrawal" Of Russians, At Least 34 Dead In Mykolaiv, The Fear Of The Atomic Bomb, Russia Investigates & Ukrainians Return From Abroad 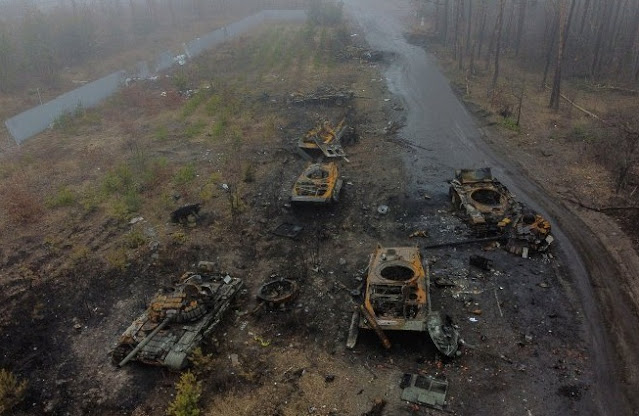 The Kremlin is withdrawing its troops around Kyiv and Chernihiv after all. The aim: to hold occupied territories "to the east and south" and "to dictate conditions harshly".

North In northern Ukraine, Russian units appear to be retreating more hastily than expected. At least the Ukrainian government reported that it was observing a "rapid retreat" of Russian forces. The attackers would fall back in the Kyiv and Chernihiv regions, said Mikhailo Podoliak, an adviser to President Volodymyr Zelenskyy.

In the Kyiv suburbs, the Ukrainian defenders had made significant progress in recent days and were able to push back the attackers. Apparently the Russian leadership is now regrouping its troops. Moscow wants to " retreat its units to the east and south and retain control of large occupied areas there".

Earlier in the week, following talks in Istanbul, Russia pledged to scale back attacks on Kyiv and Chernihiv, presenting it as a concession in negotiations with Ukraine. Shortly thereafter, however, Ukrainian and Western representatives denounced that this was just a deception. However, the retreat is not a sign that the war could end soon. Because at the same time the attacks in southern Ukraine are apparently intensified. Heavy bombardments have been reported since Friday evening in the east from Kharkiv and smaller towns and places in the Donetsk and Luhansk regions, from the south in the Kherson region and several places in the center of the country.

In the north in particular, the Russian army had difficulties in supplying its units with sufficient supplies. The attacks there had been stopped early and made little progress for a long time. In the south, on the other hand, Russia had conquered large regions and now seems to want to hold them. It is possible that the war aims have now changed in view of the tough resistance from Ukraine. Moscow seems to be trying to secure the conquests made in the south around Crimea and Donbass and keep the regions permanently occupied. Ukraine now needs "heavy weapons" to advance into occupied areas in these regions "and push back the Russians as far as possible," Podoliak said. Several states have already pledged.

At least 34 dead in attack on administration building in Mykolaiv

Russian troops fired rockets at the southern Ukrainian city of Mykolaiv last Tuesday, hitting the regional administration building. According to new information, at least 34 people were killed. Since then, rescue workers have been searching the rubble for survivors. The number of confirmed fatalities has increased steadily during the operation.

The building housed, among other things, the office of the governor of the region , Vitalij Kim. The governor, who was not at the site when the missile struck, later posted pictures on social media showing a huge hole gaping in the nine-story building. Mykolaiv is still being shelled. In the last few hours alone, 14 people have been wounded, according to Ukrainian media.

The fear of the atomic bomb is back

The Russian attack on Ukraine triggered a fear in many people that – depending on the generation – they had long suppressed or had never felt before: the fear of a nuclear war. In the past century, the world narrowly escaped the nuclear apocalypse several times. 30 years ago Russia and the USA agreed on disarmament, the number of nuclear warheads fell massively.

Ever since Vladimir Putin threatened the West with "unprecedented consequences" on February 24 if he stood in the way of Russian troops, the unthinkable seems to be conceivable again . Are these worries justified? Has nuclear war become more likely? 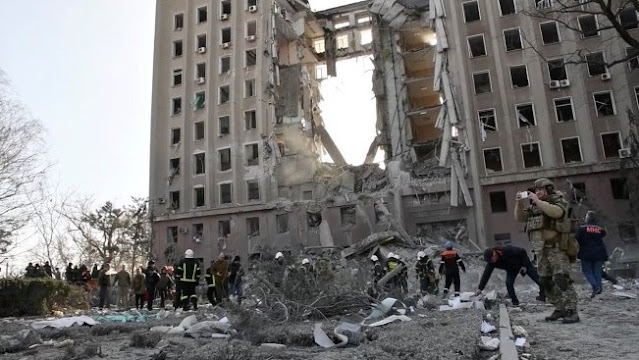 According to Ukrainian sources, the Russian military is concentrating its attacks

on the eastern regions of Ukraine. There are air strikes on the cities of Mariupol, Kharkiv and Chernihiv, said presidential adviser Oleksiy Arestovych on Ukrainian television. In addition to the armaments industry, residential areas are also affected. This could not be verified independently. Russia denies attacking civilian targets.

Arestovych said Russia is trying to turn the city of Chernihiv into a second Mariupol. The port city of Mariupol has been badly damaged in recent weeks. However, Chernihiv can still be reached by land, and residents can leave the city. According to President Volodymyr Zelenskyy's adviser, Ukraine has pushed Russian soldiers towards the state border in the north and north-east. More than 30 villages were recaptured around Kiev.

Russia has launched criminal proceedings against the Ukrainian military over an alleged terrorist attack. The occasion is a helicopter attack on an oil storage facility near the city of Belgorod. This was announced by the Russian national investigative authority in Moscow. Two Ukrainian attack helicopters equipped with heavy offensive weapons illegally entered Russian airspace yesterday and carried out at least four airstrikes against the fuel complex. There were no dead or injured.

The Ukrainian side has expressed a defensive view of the allegations. Defense Ministry spokesman Oleksandr Motusianyk said Ukraine cannot be held responsible "for all catastrophes and all events in Russia." The Russian government has accused Ukraine of several attacks on its territory in recent weeks.

Hundreds of thousands of Ukrainians return from abroad

Despite the war, many Ukrainians are apparently returning to their homeland from abroad. In the western Ukrainian metropolis of Lviv alone, 19,000 people crossed the border within 24 hours, local military chief Maxim Kosyzkyj wrote on Facebook. This means that more Ukrainians entered the country than left the country during this period. According to the military chief, 556,000 people have re-entered the country since the Russian attack on Ukraine began on February 24.

The spokesman for the Ukrainian border guard said in an interview with the portal Ukrayinska Pravdaa figure of 620,000 people. According to estimates by the UN refugee agency UNHCR, more than four million people have fled abroad since the Russian invasion began .