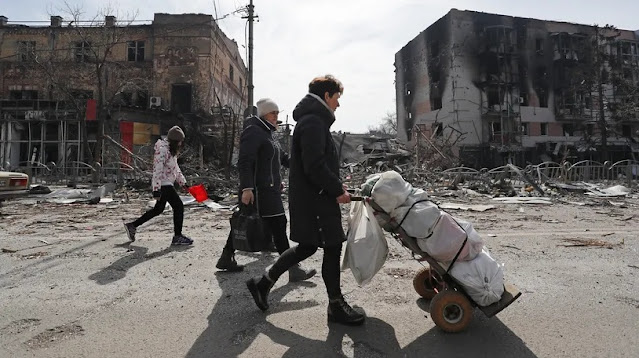 According to the marines in the besieged city, they are running out of ammunition. The separatists are threatening a chemical attack on the Russian state broadcaster.

The units of the Ukrainian armed forces in besieged Mariupol expect their defeat tonight. This was announced by the 36th Marine Brigade on Facebook. She reported in the early morning of total isolation from the rest of the country and other military units and supply routes. "Today will probably be the last battle as we are running out of ammunition," they write in the statement, which is addressed "to the dear Ukrainian people."

"We have been defending Mariupol for 47 days. We have been bombed from planes, shelled by artillery, tanks and other firearms," ​​the marines wrote. "We stood our ground with dignity and achieved the impossible. But all resources tend to run out."

"We've been written off"

Almost half the brigade was wounded, most of the infantry killed. Gunfights would be fought by artillerymen, radio operators, cooks, drivers and the military orchestra. The condition of the troops is catastrophic: "The marines have been fighting for more than a month without replenishment of ordnance, without food, without water." The soldiers "drank almost from puddles" and were "killed in groups".

The survivors of the brigade were pushed back to the Azovmash factory in the east of the city, the Russian army was shooting at them from all directions and "trying to destroy us". After the last firefight, the unit wants to go into close combat. "Further comes death for some, imprisonment for others."

The soldiers also raise serious allegations against the military leadership. Since the beginning of the war there had only been one delivery of ammunition, and the High Command's announcements that the blockade would be broken had had no effect. There were opportunities to acquire reserves and opportunities to break out of the city and join other Ukrainian units.

Those chances no longer exist. "No one wants to talk to us anymore because we've been written off," the statement said, ending by asking the people to "keep the marines in good memory."

The pro-Russian separatists fighting in Mariupol reported this Monday that they had already taken control of the port. Armed forces of the self-proclaimed Donetsk People's Republic have taken control, Russian agencies Ria and Interfax wrote on Monday, citing Donetsk separatist leader Denis Puschilin. Before the war, Mariupol had almost half a million inhabitants, but now around 100,000 people in the city are still cut off from the outside world.

Thousands of deaths feared in Mariupol

Humanitarian supplies are blocked by the occupying forces around the city, and the supply situation is catastrophic. According to the city administration, which assumes that at least 5,000 civilians were killed, 90 percent of the buildings have been destroyed.

The mayor also reported on the use of mobile crematoria by pro-Russian fighters to destroy the bodies of civilians. Information from the city can hardly be checked independently, but several hundred eyewitnesses manage to escape in private cars almost every day.

Most lines of communication are also broken. In their statement, the marines thanked US billionaire Elon Musk. The terminal to his Starlink satellite network, which he made available, is still intact and has survived several air raids.

According to Russian media reports and the state news agency Ria, the spokesman for the military Eduard Bassurin said on Channel One, which is also state-run. Accordingly, 3,000 to 4,000 volunteer fighters from Ukrainian units were entrenched there. It was tactically wrong to fight them by assaulting the building, Bassurin said.

"There are underground floors there, so an assault doesn't make sense." Instead, all entrances to the site would have to be blocked. "And then, I think, you should contact the chemical troops, who will find a way to smoke the moles out of their burrow."

Warnings from the Ukrainian and Western secret services of a possible use of chemical weapons in eastern Ukraine have recently increased, and the British Ministry of Defense also sees an increasing likelihood of the use of phosphorus bombs in Mariupol. The banned warfare agent has already been used in the Donetsk region.