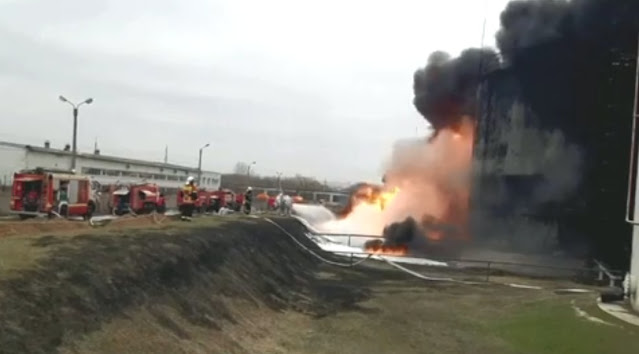 This is the first Ukrainian air strike launched directly on Russian soil since the beginning of the war.

Fire in the Russian oblast of Belgorod. According to the RBC media, quoting the Kremlin delegate in the region Vyacheslav Gladkov, an "air attack by two helicopters of the Armed Forces of Ukraine " caused a fire in a fuel depot. A series of videos captured by security cameras and amateurs, not verified by this newspaper, show two projectiles hitting the facilities from the air, before triggering a large flare.

Gladkov has reported that two employees of the facility were injured, and that the detonation prompted the evacuation of part of the local population. For its part, according to the Reuters agency, the Russian oil company Rosneft, owner of the deposits, has denied that there have been any injuries, although it did not go into details about what happened. The Russian state agency RIA Novosti has shown images of the suffocation of the flames and has specified that the fire has affected eight fuel tanks with two thousand cubic meters each.

At a press conference, Kremlin spokesman Dimitri Peskov reported that President Vladimir Putin had been informed about the incident. Peskov said the attack could jeopardize Moscow 's peace talks with Kiev. "Of course this cannot be perceived as improving the conditions for continuing the talks," Peskov said, adding that everything is being done to avoid fuel supply interruptions in the city of Belgorod.

Energy Minister Nikolai Shulginov said the incident will not affect the region's fuel supply or prices for consumers, according to Reuters.

This is the first Ukrainian air strike launched directly on Russian soil since the beginning of the invasion. It will also be the second in Belgorod, a province bordering the Ukrainian territory of the Kharkov oblast , one of the cities hardest hit by Russian artillery. According to various media outlets, a huge explosion rocked an arms depot in Belgorod. Without official confirmation, some versions pointed to the impact of a Ukrainian Tochka-U missile.

In the case of this Friday, two MI-24 helicopters, flying at low altitude, managed to travel at least 20 km through the Russian sky, circumventing anti-aircraft security devices and damaging, with S-8 rockets , an essential element of the logistics architecture. of the Russian offensive. Without fuel, tank advances slow down. It remains to be seen how that will affect the current invasion, which Russia says has stopped in the northwest to fit in with the goal of shielding the eastern regions.

In the last few hours, the Ukrainian Armed Forces have claimed to have made new advances on the Russians on the outskirts of the capital. These are not seizures of large territories, but they contribute to raising morale in a country whose government continues to recognize that it mistrusts the word of the Kremlin. Without going any further, the day on Thursday was hectic in Kiev. At least two large explosions could be heard in the center of the city, showing that the situation is far from stable.