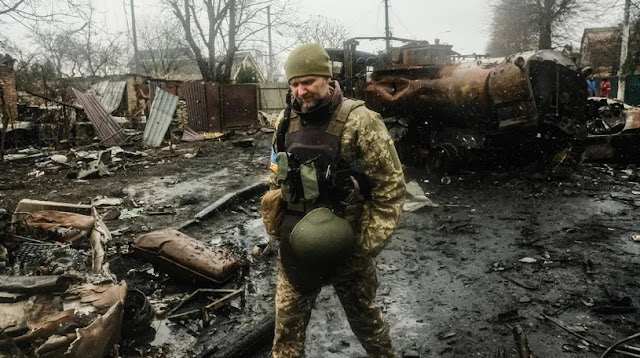 According to Moscow, the video material from Bucha cannot be trusted. There are pictures of a "fictitious attack". This is how they want to further discredit Russia.

After the discovery of hundreds of bodies in Bucha, Ukraine, the Russian government has denied allegations against its troops. "We categorically reject all allegations," government spokesman Dmitry Peskov said, according to the Russian news agency Interfax.

Russian Foreign Minister Sergei Lavrov accused Ukraine of orchestrating the situation in Bucha. According to the news agency TASS, Lavrov said it was a "fictitious attack" with the aim of discrediting Russia.

Hundreds of bodies were discovered in Bucha, a suburb of the Ukrainian capital Kiev, over the weekend after Russian troops withdrew. Ukraine's Prosecutor General Iryna Venediktova said Sunday the bodies of at least 410 civilians had been found in areas outside the Ukrainian capital - many with their hands tied, gunshot wounds at close range and signs of torture.

During a visit to Bucha, Ukrainian President Volodymyr Zelenskyi spoke again of war crimes being committed in the city. "The world will recognize this as genocide," he said, surveying the destruction accompanied by armed security forces. When asked by a reporter whether it was still possible to negotiate peace with Russia , he said yes: "Ukraine must have peace," he said. At the same time, he stressed that an early success in the negotiations was in Russia's interest: "The longer the Russian Federation delays the talks, the worse it will be for them."

Kremlin spokesman Peskov, on the other hand, questioned the authenticity of the numerous recordings of the dead civilians: "From what we saw, the video material cannot be trusted in many respects because our specialists from the Defense Ministry found evidence of video forgeries and other fakes there." Lavrov spoke of a "fictitious attack"; the images of corpses have been circulated on social media by Ukraine and western countries.

Ukrainian President Volodymyr Zelenskyy expressed fears that "more terrible things could happen" after the Bucha massacre. Other regions of the country are still under Russian control. "More deaths and abuse" could become known there. Zelenskyj sees the continuation of the peace negotiations with Russia as more difficult.

Meanwhile, the West is preparing tightened sanctions against Russia. The EU will "urgently work on further sanctions against Russia," said EU foreign policy chief Josep Borrell. "The massacres in the city of Bucha and other Ukrainian cities will be added to the list of atrocities committed on European soil," he said. The EU strongly condemns the "atrocities" allegedly committed by Russian forces.

Meanwhile, calls for an international investigation into alleged Russian war crimes in Bucha and other parts of Ukraine grew louder. Ukrainian President Zelenskyy and Poland's government spoke of a "genocide" against the civilian population.

French President Emmanuel Macron has called for Russia to be held accountable for war crimes before international justice. "It is clear that today there are very clear indications of war crimes. It was the Russian army that was in Bucha," Macron told radio station France Inter on Monday. He also offered to help with the investigation.

UN Human Rights Commissioner Michelle Bachelet called for independent investigations into possible war crimes. "Everything should be done to secure evidence," said the High Commissioner in Geneva. All bodies should be exhumed, identified and examined. Reports from Bucha and other areas raise "serious and disturbing questions about possible war crimes" and other rights violations, Bachelet said.