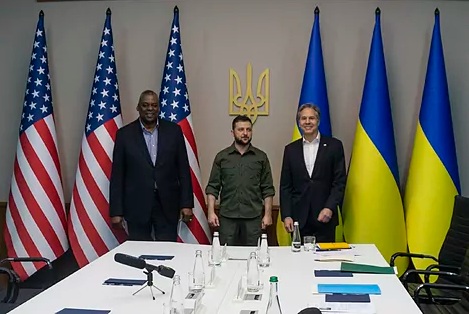 After his caution at the beginning of the conflict, Joe Biden is expanding the range of weapons for kyiv.

The Russian Government demands that the United States stop delivering weapons to Ukraine. It has done so through an official note as revealed by the Russian ambassador in Washington, Anatoli Antonov. In an interview on the Russian state TV channel Russia-24, Antonov criticized Washington's latest €738 million arms package for Ukraine.

Moscow denounces that Washington will deliver "an enormous amount" of weapons to Kiev and warns that this "does not contribute to finding a diplomatic solution or resolving the situation." More shipments could bring "unpredictable consequences," according to the note, to which 'The Washington Post' had access. Joe Biden 's red lines remain: no US troops on the ground and not to mention that long-awaited no-fly zone run by NATO, as it could drag the military alliance into direct conflict with Russia.

Biden unveiled his weapons package in a speech from the Roosevelt Room of the White House last week. For Moscow, the delivery of weapons to Ukraine by the United States is unacceptable and demands an end to this practice", with which Washington "is trying to aggravate the situation". The United States will equip five artillery battalions for Ukraine and provide new drones They explode on impact.

Moscow is toughening its tone against supplying arms to its rival. Antonov's words came after the US Secretaries of State and Defense (Antony Blinken and Lloyd Austin, respectively) traveled to the Ukrainian capital on Sunday, where they met with Ukrainian President Volodimir Zelensky. US support is increasingly varied. US troops are beginning to train Ukrainians in Europe. The US sent a Patriot missile system to Slovakia, to be operated by US troops, so that Bratislava sent its S-300 air defense system to Ukraine. So far Russia has only reacted with words to this reinforcement of the Ukrainians.

"The [US] goal is to prevent Russia from being firmly established, Russian interests from being respected around the world, and the Russian voice from being heard," Antonov lamented.

PRIORITY: STOP THE RUSSIANS ON THE GROUND

Since Russian President Vladimir Putin launched his troops against Ukraine on February 24, Washington has spent an estimated 3.1 billion euros sending military assistance to Ukraine. Now that Russia is no longer encircling kyiv, the US seems less concerned than at first about an escalation of the conflict. The US European command in Stuttgart, Germany, is working hard to move as many weapons as possible from US stockpiles to the Ukraine border.

Among the weapons provided are the Javelin, an anti-tank weapon that is carried on the shoulder and fires heat-guided rockets that are launched at targets up to 4 kilometers away. It can be controlled with a portable unit, sending a meter-long projectile directly into the side or top of an armored car. The invading Russian forces "are mainly mechanized forces" and the US has prioritized weapons that can be deployed quickly and stop the Russians on the ground.

Other weapons shipped so far include drones that can become flying bombs and anti-aircraft weaponry, mainly against helicopters. The famous Stinger anti-aircraft systems were used to shoot down Soviet aircraft in Afghanistan. The system is relatively useless against Russian bombers flying much higher. The new drone, called the Phoenix Ghost, is a previously unknown design.

The US has not provided armored vehicles, arguing that the Ukrainians are not familiar with these models. But, after Biden's initial reluctance to supply fighters, Ukraine has at least received aircraft parts from other countries, and has thus managed to continue flying its own aircraft. Twenty aircraft have returned to combat after a season in Ukrainian hangars.

Howitzers are also important to maintain a steady stream of fire that can be used to force Russian forces into trenches while Ukrainian infantry troops advance. A scenario that can occur in the new phase of war in Donbas.

A WAR OF MONTHS OR YEARS

The atrocities against the civilian population of which Moscow has been accused and the downward reassessment of the risk of nuclear escalation are opening the door to more and more weapons supplies. Russia defends that its "special military operation" is essential to guarantee its security and rejects Western accusations of executions and indiscriminate bombing of cities.

Moscow is irritated by all this support from the US and its allies to the Ukrainians, who have shown their ability to resist. Nobody contemplates a war of weeks anymore, but of months or years. According to the 'Financial Times', every day between eight and ten cargo flights, most of them operated by the US, land near the western borders of Ukraine, transporting hundreds of millions of euros in increasingly heavy weapons.

The weapons are arriving in Ukraine in record time for US procedures: between 48 and 72 hours, according to The New York Times. The United States and its allies have taken time to figure out what kind of systems they can provide without provoking a response from Moscow, but so far Russia has not attacked any shipping. Moscow's attitude towards these supplies may depend on the performance of Russian troops on the ground in this new phase of the Donbas war.