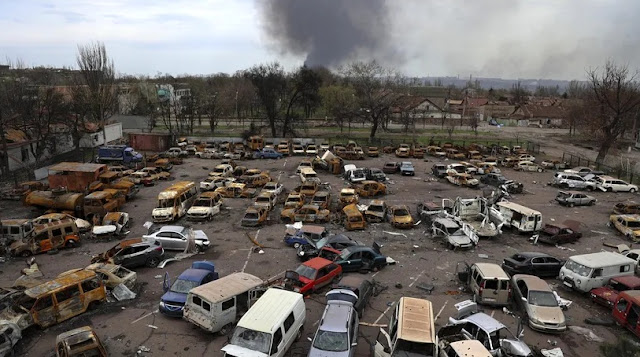 Russia has given up trying to capture the Azov-Steel plant as well. Ukraine confirms continued resistance and calls for safe passage for civilians.

Without having broken the resistance of the last Ukrainian soldiers, Russia has declared Mariupol, which has been heavily fought over for weeks, as its own. According to the Interfax news agency, Russian Defense Minister Sergey Shoigu said there were still more than 2,000 Ukrainian soldiers at the Azov-Stahl steel plant.

Russian President Vladimir Putin ordered Shoigu not to storm the steelworks. A corresponding order had been withdrawn. The fighters in the catacombs should lay down their weapons. "The Russian side guarantees their lives," Putin said. "We have to think about the lives and health of our soldiers and officers," Putin said in justifying his departure from plans to bring the factory under Russian control. Rather, the area should be besieged so closely that "no fly can get out".

He spoke of a success and the "liberation of Mariupol" and ordered the military involved to be decorated. "They are all heroes," Putin said. Observers fear that the Russian military could have killed thousands of people with the week-long siege and heavy shelling. The port city was largely destroyed by the Russian attacks.

Ukraine has repeatedly accused Russia of firing at agreed escape corridors, which is why escape was rarely possible. The Ukrainian defenders who remained there have already called for help several times, stating that they are on the verge of defeat. Nevertheless, the Ukrainians let several ultimatums from the Russian invaders slip.

Ukraine confirmed that resistance at the Azov Steel compound remained unbroken. Russia understands that it cannot take the steelworks by force, says Oleksiy Arestovych, who is a close adviser to Ukrainian President Volodymyr Zelenskyy. "They can't take Azovstal, they understand that, they have huge losses there."

The Ukrainian government is urgently demanding safe passage from Russia for civilians and injured soldiers from the steel mill. "There are around 1,000 civilians and 500 injured soldiers there," said Deputy Prime Minister Iryna Vereshchuk in an online post. "They must all be taken away from Azov Steel today."

According to Shoigu, 1,500 of the Ukrainian soldiers from the steel mill surrendered. The Ukrainian side did not initially provide any information on this. No one left the plant via the corridors offered, the Russian Defense Minister said. Earlier, the Ukrainian side proposed negotiations on the fate of the fighters and the rescue of civilians who had taken refuge in the plant.

Shoigu also announced that the city was heavily mined. "All the important objects of the city's infrastructure, including the seaport and the fairway, were not only mined, but also blocked by floating cranes," he said. As a result, many foreign ships were prevented from exiting.

The Russian armed forces are advancing

According to British information, the Russian armed forces are advancing from their deployment areas in the eastern Ukrainian Donbass region towards Kramatorsk. The mayor of the city of Kharkiv also reported in a televised speech about “huge explosions”. "The Russian Federation is furiously bombing the city," he said.

Meanwhile, Russian Defense Minister Sergey Shoigu has declared the Ukrainian port city of Mariupol occupied. However, there are still more than 2,000 Ukrainian soldiers in the Azov steel plant. According to Ukrainian sources, four buses with women, children and the elderly were able to leave Mariupol today. According to Deputy Prime Minister Iryna Vereshchuk, evacuations will continue throughout the day.

Without having broken the resistance of the last Ukrainian soldiers , Russia has declared Mariupol, which has been heavily fought over for weeks, as its own . More than 2,000 Ukrainian soldiers are said to be still in the Azov steel plant.

According to Defense Minister Christine Lambrecht, Germany and allies from the EU and NATO are preparing to deliver tanks to Ukraine in the coming days.

German exports to Russia fall by more than half . This puts the country in twelfth place among Germany's most important export countries.

Spanish Prime Minister Pedro Sánchez and his Danish colleague Mette Frederiksen arrived in the Ukrainian capital of Kyiv this morning.

Chinese President Xi Jinping has once again spoken out against sanctions in international conflicts.

According to the German Federal Ministry of the Interior, 366,304 refugees have arrived in Germany since the Russian invasion of Ukraine began.