Russia-Ukraine Conflict: Russia Assures That It Will Win In Ukraine And That The West Will Not Be Able To Isolate It 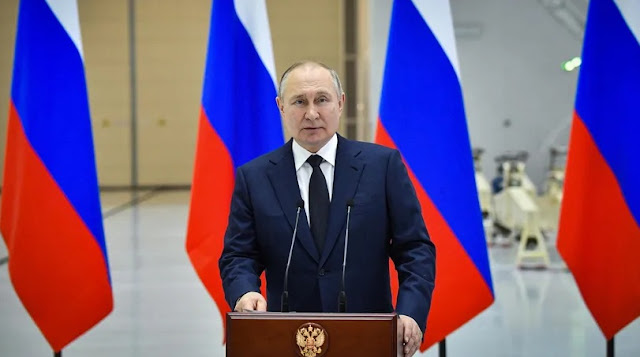 Vladimir Putin warns of new waves of immigrants who will also arrive in Western countries.

As Russia prepares a new offensive in eastern Ukraine, President Vladimir Putin said on Tuesday that his "special military operation" will achieve its objectives no matter who weighs and that the West will not be able to isolate Russia. "There is no doubt that it will be so," Putin said, calling his plans "absolutely clear" and "noble." The Russian president has accused the West of having been feeding ultra-nationalism in Ukraine, where he acknowledged that "a tragedy" is taking place in a world that is "more complex than during the Cold War."

Putin believes that Ukraine has deviated from the agreements reached in the peace talks in Istanbul and that the negotiations are at a "dead end" . In his view, the end of his "military operation" now depends on the intensity of the fighting.

On sanctions, the West does not understand that difficult conditions "unite the Russian people," reflected the head of the Kremlin, who acknowledged that the damage to the Russian economy could increase "in the medium and long term." In any case, "it is impossible to severely isolate someone in the modern world, especially in a country as vast as Russia." Unlike,

As for the images of the corpses scattered around the Ukrainian city of Bucha, confirmed by satellite captures when the Russian troops were still there, Putin assured that they were false. Putin, who had been ubiquitous on Russian television in the early days of the intervention, then all but disappeared after Russia's withdrawal from northern Ukraine this month, has portrayed the fighting as an inevitable confrontation with the United States , which he said threatened Ukraine. Russia by meddling in his backyard.

Putin warned of new waves of immigrants who will also arrive in the West. He assured that the main objective of the attack on Ukraine is to help the Donbas People's Republics, which Moscow has already recognized. The Russian leader assured that he was forced to do so because the kyiv authorities, pushed by the West, refused to comply with the Minsk agreements for a peaceful solution.

Putin has once again denounced the genocide in Ukraine . And he assures that it was only a matter of time before it was Kiev that attacked: "Ukraine had begun to become an outpost against Russia, they had begun to cultivate the seeds of nationalism and neo-Nazism, which had been there for a long time. collision with these forces was inevitable. They were just choosing the moment to attack. And subsequent events show the deep Nazism that has sprouted there."

Putin recalled that the negotiations with Ukraine began largely thanks to Alexander Lukashenko , the president of Belarus. According to Putin, Minsk is now perfect as a trading platform. Beside the Russian leader, Lukashenko wondered "why the hell do people care so much about sanctions? "

Both leaders are more united than ever. The previous visit of the Belarusian president to Russia took place on March 11, with Russian soldiers already advancing in Ukraine and using Belarusian territory as a rearguard. During the morning, both commemorated Cosmonautics Day, with the leaders of both countries visiting the Vostochni Cosmodrome in the Amur province (Russian Far East).

As the West prepares new sanctions, Putin warned that attempts to isolate Moscow will fail, citing the success of the Soviet space program as evidence that the Russians can make spectacular progress under difficult conditions. "If our [Western] partners make the situation worse, they will feel the consequences themselves," he warned the "sanctioning" countries.

Putin concluded that the West's "economic blitzkrieg" has failed . Moscow will continue to seek cooperation with its remaining allies. From now on, Russia and Belarus will jointly create the space infrastructure that the country needs in its future projects. Workers and engineers, as well as enterprises and companies from Belarus will have the opportunity to participate in the development of the city of Tsiolkovsky and the Vostochny cosmodrome. Putin wants to secure the "infrastructure that guarantees the Union State [Russia and Belarus] access to space," he said.

Russia intends to resume its lunar program and launch the Luna-25 mission, showing the world that Russia is a superpower that needs no one. The main objectives are to perfect soft landing technologies in polar areas and to carry out an exploration of the designated area near the south pole of the Moon.

Both heads of state saw how the construction works of a launch ramp are progressing and spoke with pilot-cosmonauts and cosmodrome workers. Lukashenko and Putin analyzed the entire set of relations between Russia and Belarus, two countries twinned by sanctions and their pulse with the West.