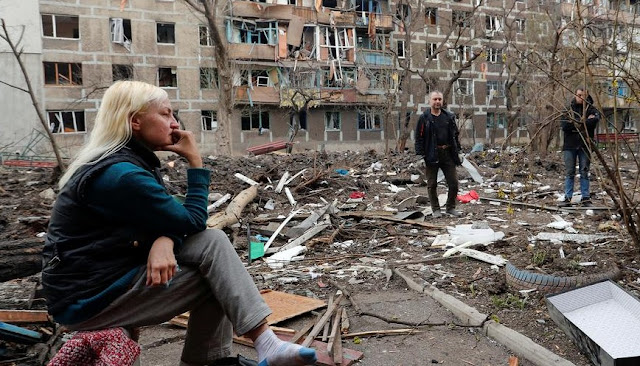 Hundreds of thousands of Ukrainians are said to have been deported to Russia.

According to a leading Ukrainian MP, Russia has abducted around 500,000 people from Ukraine. Mykyta Poturayev, who heads the parliament's humanitarian committee in Kyiv, urged the Red Cross to contact these people.

"Half a million Ukrainian citizens have been deported from Ukraine to the Russian Federation without their consent," Poturaev said in a video message to the European Parliament. There is currently no way to contact them.

Volodymyr Zelenskyj: I didn't hear anything about the Russian offer for negotiations

Ukrainian President Volodymyr Zelenskyj claims that he has neither seen nor heard of the offer of negotiations that the Russian government is said to have sent. Earlier, Kremlin spokesman Dmitry Peskov said he was waiting for a response after handing the document to the Ukrainian government. According to Peskow, the document contains "absolutely clear and sophisticated formulations." However, details of the content are not known.

No tennis professionals from Russia and Belarus will be admitted to the Grand Slam tournament in Wimbledon this year. According to the organizers, this is a reaction to the Russian war of aggression in Ukraine. The organizers said it was one of the tournament's responsibilities to use whatever means possible to limit Russia's global influence.

Given the war of aggression, it would be unacceptable that the Russian government could take advantage of tennis pros from Russia or Belarus playing at Wimbledon. If the conditions change fundamentally by June, the decision will be reconsidered. The exclusion affects, for example, the world number two Daniil Medvedev from Russia and the two-time Grand Slam tournament winner Wiktoryja Asaranka from Belarus. The third Grand Slam tournament of the year takes place from June 27th to July 10th. Wimbledon is the first event to ban tennis pros because of the Russian invasion of Ukraine.

Russia criticized the decision: "Once again, athletes are being held hostage by any political bias, political intrigues, hostile actions against our country. This is unacceptable," Kremlin spokesman Dmitry Peskov said, according to the Interfax agency.

According to an adviser to President Volodymyr Zelensky, Ukrainian troops have initially prevented Russian troops from advancing on the city of Sloviansk. The Russian units had come from the north-eastern city of Izyum, said advisor Oleksiy Arestovych in a video speech. "They have concentrated their forces there. They are trying to advance there, but so far they are not succeeding." The information cannot be independently verified.

According to a media report, Putin wants to force victory

A media report, people around the Kremlin see no signs that the Russian President is considering an end to the war. Bloomberg News reports, citing "ten people with direct knowledge of the situation." According to the anonymous whistleblowers, who hold "high positions in government and state-owned companies," Putin has isolated himself from dissenting advisers even more than before the war . According to two insiders, the group of people who have access to the president is even smaller than the "limited group of hardliners" from whom he has previously sought advice.

According to the report, senior government officials are increasingly questioning Putin's decision to invade Ukraine. Sanctions and arms deliveries were not expected to the extent that they had been decided by the West. However, the President is not letting this deter him from his course – and in view of the high losses of conventional troops, if in doubt he may be willing “ to use nuclear weapons on a limited scale in the context of a campaign which he regards as his historic mission”.

According to the whistleblowers, Putin continues to believe in his support from the population and rejects warnings about the economic and political consequences of the war. However, the doubters, whose number is increasing, fear that Russia will be isolated for years and that Russia's economic growth of the past two decades will level off.

More than a million Ukrainians have returned to their homeland since the start of the Russian war of aggression. 1.1 million Ukrainian citizens have entered the country since the invasion began, said Ukrainian border guard spokesman Andriy Demchenko. He did not specify how many of them fled the war or had previously lived abroad.

According to Demchenko, "almost five million people in both directions" have crossed the Ukrainian border since the start of the war. The UN assumes that the number of refugees will increase. It is the largest refugee movement in Europe since the Second World War. According to estimates by the International Organization for Migration (IOM), another 7.1 million people are fleeing within Ukraine.

Several evacuation buses are said to have left Mariupol

In the besieged city of Mariupol, several buses with civilians apparently started from a designated evacuation point. Two Reuters news staffers saw dozens of people get on. Local authorities have said they plan to evacuate around 6,000 people out of the city via an escape corridor.