Russia-Ukraine Conflict: Putin Is Angry With Kyiv For The Second Day In A Row 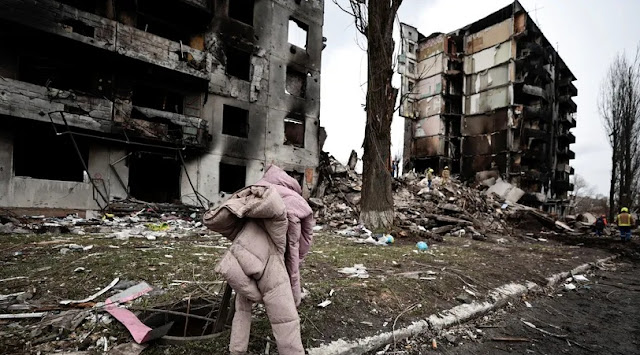 As reported by the Russian Defense Ministry, last night they destroyed 16 Ukrainian army facilities in different regions of the country, including the ships of a military equipment factory in kyiv. Ukraine sees this as a retaliatory measure for the sunk Russian warship "Moskva".

Russia has escalated its war rhetoric in recent hours, after suffering a new military debacle with the sinking of its flagship in the Black Sea, threatening to intensify missile attacks against the Ukrainian capital, Kiev, and demanding that the US stop assist his rival, under penalty of facing "unpredictable consequences".

As reported by the Russian Defense Ministry, last night they destroyed 16 Ukrainian army facilities in different regions of the country. Specifically, in the capital the Russian army has destroyed with high-precision missiles the ships of a factory of military equipment. In other areas such as Mykolaiv (east of Ukraine) or Poltava (northeast) they have also carried out attacks against enemy installations.

"The number and level of missile attacks on Kiev will increase in response to all the terrorist-type attacks and sabotage carried out by the nationalist Kiev regime on Russian territory," the Russian Defense Ministry spokesman said. Igor Konashenkov, a few hours after the main Ukrainian city suffered such an action. According to Konashenkov, the objective of this attack was a missile factory located in the vicinity of the capital, something that media such as AFP confirmed.

"It is the price to pay for the destruction of the Moskva," Andrii Sizov, a factory worker, told the aforementioned agency. The undermining of Russian military pride that the disappearance of the cruiser has meant is added to the incursions into its territory by Ukrainian helicopters and artillery attacks, which according to Moscow left at least seven injured in two border regions on Thursday.

The succession of setbacks on the battlefield has led to an explosion of statements, each one more absurd, from the Russian propagandists who dominate the media that feeds the population of that country, who today could hear calls on their televisions to " erase" the same name - "the simple idea", one of the commentators went so far as to say - from Ukraine, or demand that Kiev be bombed and the Ukrainian railway network be destroyed.

After its withdrawal from the regions around kyiv, the main option Moscow has to hit the main Ukrainian city again are rockets and aviation, an alternative that has recovered, among some analysts, the spectrum of other conflicts in which the cities have suffered the repeated punishment of this type of weaponry.

The resort to the use of ballistic missiles against large metropolises is not an unprecedented event in the war story of our era and became a classic of the war that confronted Iraq and Iran in the eighties, and later in the First Gulf War, when Saddam Hussein's regime used its Scuds to attack Israel. Saudi Arabia has suffered numerous such attacks in recent months, launched by Yemeni Houthi forces.

The Armenians also used several Scud, Tochka and Smerch rockets against Azerbaijani cities in what was called the 44-day war, which they fought two years ago. The Armenian missiles reached the second Azerbaijani city, Ganja, killing more than twenty residents in one of these actions and leaving dozens injured.

The discourse of the Russian elite and its propagandists, increasingly unhinged, has also fueled the apprehension both in Ukraine and in the US about the hypothesis that Moscow resorts to the use of tactical nuclear weapons -devastating but with localized effects- or chemical.

In an interview released in the last few hours, Oleksii Arestovych , one of the main advisers to the Ukrainian president, expressed these fears and said that "the thug (reference to Putin) has lost his mind and wants to use some nuclear weapons. At least those fears exist." He has begun to face the specter of defeat."

For his part, the director of the American CIA, William J. Burns , said that "nobody can take the threat (of resorting to atomic bombs) lightly", since the adverse development of the conflagration could enhance a "potential desperation" of Putin, which would lead him to resort to these extreme means, although he immediately clarified that he has not seen "practical evidence" in this regard.

The threats against Kiev come just as the town is gradually beginning to recover a semblance of a precarious normality that has led to the reopening of numerous businesses. The mayor of the capital, Vitali Klitschko, estimated that in recent days more than a thousand businesses, 35 markets and 460 cafes have reopened, although he asked the population not to return to this town yet since the danger of a renewed Russian attack.

The Russian attacks on the Kyiv region had actually decreased since the end of March. Moscow announced at the time that it wanted to focus its offensive on eastern Ukraine. On Friday, however, the Kremlin threatened to step up its attacks on the Ukrainian capital again. He previously accused Ukraine of bombing Russian towns near the border. The government in Kiev sees the new Russian attacks in the capital region as an attempt to retaliate for the destruction of the Moscow River.

A US Defense Department official, who asked to remain anonymous, confirmed to AFP that the Moskva River was being shelled by Ukrainian troops. The sinking of the ship was "a serious blow from a symbolic point of view" for Russia and had torn a "gap" in the fleet, the Pentagon representative said. Moscow did not confirm this information and only spoke of explosions and fire on board.

According to international agreements, Turkey has banned warships from passing through the Bosphorus and Dardanelles Straits because of the Ukraine war. Moscow can therefore not send a replacement for the Moskva to the Black Sea.