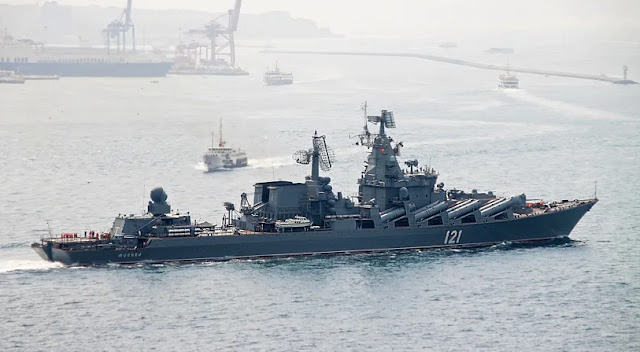 The loss of the Moscow flagship has hit Russia hard. The guided missile cruiser has long since become a national myth – now it is also being damaged.

Last night, Russia admitted that its Black Sea Fleet flagship, the Moskva, had sunk. For Russia, the ship of the Black Sea Fleet has a military, but also a great symbolic importance. We clarify the most important questions and answers about the destroyed guided missile cruiser.

Why did the ship sink?

According to Ukrainian sources, the Moskva had previously been hit by one or two anti -ship missiles. The governor of the Odessa region announced that Ukrainian troops had attacked the ship and caused serious damage. Before the Russian confirmation of the sinking, the Ukrainian presidential adviser Oleksiy Arestovych had already stated that the cruiser had sunk.

It is currently unclear whether Russian soldiers were killed by the alleged Ukrainian attack or died as a result of the sinking. The Russian Defense Ministry reported on Thursday night that the Moskva crew had been completely evacuated. US Department of Defense spokesman John Kirby disagreed, saying it was likely that there were fatalities and injuries in the incident. Up to 500 soldiers were on board.

What is the military significance of the sinking?

The Ukrainian presidential adviser Arestovych spoke of a "military event of colossal importance" and the "biggest loss of the Russian fleet since the Second World War. Since the end of the Second World War there has not been a warship of this size that has been sunk. The latter is likely to be controversial, since a comparable ship, the Argentine cruiser General Belgrano , was sunk during the Falklands War in 1982. At the same time, one can speak of a military success for Ukraine.According to experts, the sunken missile cruiser was the lynchpin of the Black Sea Fleet's air defenses.

The warship was designed as an aircraft carrier destroyer. In 1983 it was put into operation in Soviet times under the name Slava. The 186-meter warship, renamed Moskva in May 1995, was armed with 16 anti-ship missiles, long-range missiles and short-range Osa missiles. It also had rocket launchers and torpedoes. The ship underwent an extensive overhaul and modernization in 2018 and 2020 and was based in Sevastopol, the base of the Russian Black Sea Fleet on the Crimean Peninsula.

In August 2008, the Moskva was deployed in Georgia for the first time in an armed conflict. After Russia intervened in the Syrian war on the side of the ruler Bashar al-Assad, the ship was used in the eastern Mediterranean in 2015 and 2016. Since February 24, the missile cruiser has also been involved in the Russian offensive against Ukraine.

What is the symbolic value of the Moscow River?

The command ship is of great symbolic importance for Russia - and not just because the ship has been on site on many missions in recent years. It was also repeatedly used for diplomatic purposes. For example, the missile cruiser was involved in the operation surrounding the Malta summit meeting between Mikhail Gorbachev and US President George Bush in December 1989.

The ship was also used for various military maneuvers around the world and anchored in many European, Asian and African ports. Russian President Vladimir Putin also used the cruiser to receive political associates with military honors. In August 2014 he received Egyptian President Abdel Fattah al-Sissi in Sochi or, during a visit to Italy, the head of government there, Silvio Berlusconi, on the ship.

The sinking of the ship is of particular importance for Ukraine: When Russian forces captured Snake Island in the Black Sea on February 24, Ukrainian soldiers stationed there are said to have responded to calls for surrender by radio: "Russian warship, go to hell!" A saying that many Ukrainians and supporters took up in the first days of the war - and which is said to have been addressed to the Moskva . Ukrainian President Volodymyr Zelenskyy picked up on this in his latest video speech and praised all those "who have shown that Russian ships (...) can get to the bottom".

After the heavy loss of the flagship of the Russian Black Sea Fleet, Moscow's war course could change. At least that's what the British Ministry of Defense expects. Since the ship served as the command and hub of air defense, the military would now have to adapt.

The loss means Russia has suffered damage to two key naval assets since the invasion began. The first was the Saratov DropShip on Mar 24. Both together will probably lead to Russia reviewing its maritime stance in the Black Sea, the government in London said.