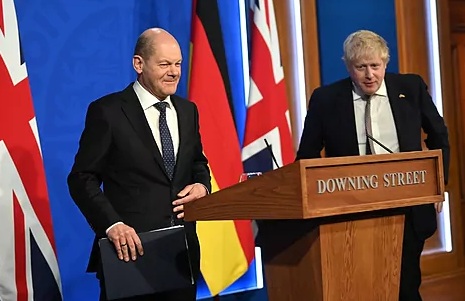 Boris Johnson tries to build bridges with the EU in the face of reticence about sending weapons and dialogue with Putin.

"The Europe that we knew six weeks ago no longer exists," Boris Johnson certified in the presence of German Chancellor Olaf Scholz and in the face of cracks between the allies at the critical moment of the war in Ukraine.

"Olaf and I agree that our two countries and all our allies must do more to help Ukraine," said the "premier", who hours before had received Polish President Andrzej Duda in Downing Street.

The architect of Brexit has suddenly found himself in the position of building bridges between the members of the EU, with an unusual call for unity in the face of the common enemy: "Putin's invasion has hit the foundations of security on the continent, but his ambition to divide us has blatantly failed. What he has achieved is rather the opposite: uniting Europe and strengthening the transatlantic alliance , in support of Ukraine and in close solidarity with each other."

"Putin has forced Europe to rearm together to strengthen our shared security," concluded Johnson, who condemned "the inconceivable attack" on the Kramatorsk train station as "a war crime that cannot go unpunished." "The Russian president is responsible for these war crimes and that is something I fully share with Boris Johnson," Olaf Scholz said.

The German chancellor defended in any case the attempts of the French president Emmanuel Macron to maintain an open thread of communication with Putin despite his devastating attacks against the civilian population in Ukraine. "Criticism of Macron is unjustified," he said. "The French president is very committed and is trying to make a contribution."

"Negotiating with Putin is not something promising for me," Johnson warned. "That's not to say that I don't admire the efforts of those who are trying to find a way forward... As far as I'm concerned, I'm very skeptical and even cynical about this possibility."

The day before his meeting with Scholz, Boris Johnson dispatched Andrzej Duda, who also boasts of speaking every day with Ukrainian President Volodimir Zelensky.Duda maintains that "it doesn't make sense to talk to Putin", along the same lines as Prime Minister Mateuzs Morawiecki, when he said this week: " Nobody negotiated with Hitler ".

Duda took advantage of his time in Downing Street to call for a maximum tightening of economic sanctions against Russia and a substantial jump in the shipment of weapons to Ukraine, including a hundred modernized Russian-made tanks held by Poland.

Boris Johnson announced for his part on Monday the shipment of a new package of weapons worth 120 million euros, mainly anti-tank missiles and Starstreak surface-to-air missiles. The "premier" has not yet confirmed the shipment of armored vehicles, anticipated by The Times this week, although he left the door open to the possibility of arming the Ukrainian resistance with tanks.

"I am inclined in principle to consider sending defense weapons that can serve the Ukrainian army to defend itself and the civilian population," Johnson said. "It is very important that the equipment we send is useful and operational for the Ukrainians."

The "premier" also highlighted the "enormous steps" that the EU countries are taking to reduce their dependence on Russian hydrocarbons . "We can't change our energy system in a fortnight, but the war is not going to end in a fortnight either," Johnson warned, hours after announcing his new energy strategy.

"Just think what the Germans are doing," Johnson stressed. "Their reliance has been huge but they are trying to move very fast. I think that by the middle of 2024, Germany will stop using gas from Russia, and that is really extraordinary."

"We are doing everything we can, which is a lot," Scholz certified with his host. "We are actively working to be independent in our oil imports, and that is something that I think we can achieve this very year."

In his first official visit to British soil, Olaf Scholz proposed "intensifying relations and cooperation" between the two countries, leaving post-Brexit tensions during the Merkel era behind and in the context of the future of European security.

The recent meeting of NATO foreign ministers has once again highlighted the division of opinions regarding the war in Ukraine. Germany has been one of the most reluctant countries to increase arms shipments and has made common cause with France and Turkey when it comes to maintaining contacts with President Putin.

Poland and the Baltic countries, however, are in favor of a drastic break with Moscow, a position that British Foreign Secretary Liz Truss endorsed this week during the NATO ministers' conclave: "The era of commitment to Russia is behind us The NATO-Russia Founding Act (on relations of cooperation and mutual security) is dead. It is time to let go and think about a new approach."