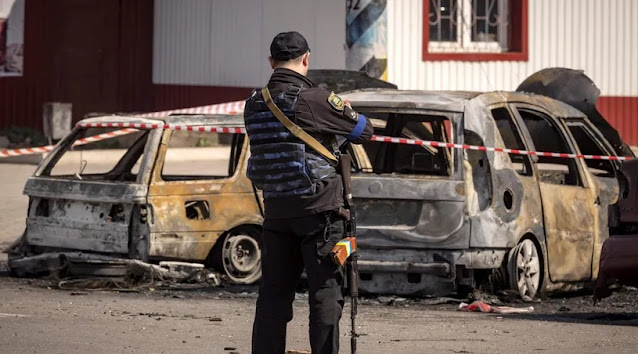 During an evacuation operation in Kramatorsk in eastern Ukraine, Russian rockets are said to have hit the train station. According to Ukrainian authorities, there were numerous victims.

Dozens of people were killed and injured in a rocket attack on the Kramatorsk train station in eastern Ukraine, according to Ukrainian sources. According to the regional governor of Donetsk Oblast, 50 people were killed in the attack, five of whom were children. This was announced by Pavlo Kyrylenko on Telegram. Accordingly, 98 injured were taken to nearby hospitals, 16 of them children.

The Ukrainian secret service SBU had previously spoken of 39 dead, the number of injured was initially given by the authorities as 87. The Russian side said there had been no deployment order in Kramatorsk.

At the time of the attack, thousands of people are said to have been waiting at the train station to be evacuated. Governor Pavlo Kyrylenko published a photo showing several people lying on the ground, next to numerous suitcases and bags. Another picture shows emergency services who are obviously trying to put out a fire.

A reporter from the AFP news agency at the scene reported at least 20 dead in body bags and under plastic sheeting. Earlier in the morning he had seen hundreds of people waiting for a train to flee west. Burnt-out cars are said to have stood in front of the station building, pools of blood and charred benches could be seen at the entrance and in the station hall.

Kyrylenko accused Russian troops of intentionally targeting civilians. "The Russian fascists knew very well where they were aiming and what they wanted: to sow panic and fear, they wanted to hit as many civilians as possible," the governor said.

Ukrainian President Volodymyr Zelenskyy also condemned the attack. In a video address to the Finnish parliament, he said Russian troops had attacked an ordinary train station where civilians were waiting to be evacuated . The attack shows what Russia means by protecting the Donbass region and the Russian-speaking population. "This is the 44th day of our reality," Zelenskyj said.

Pro-Russian separatists in the self-proclaimed Donetsk People's Republic spoke of a Ukrainian rocket attack. The separatists also spoke of an evacuation at the time of the attack.

Russia also rejected the allegations. The Defense Ministry in Moscow spoke of a "provocation". "Our armed forces do not use this type of missile," Kremlin spokesman Dmitry Peskov said, according to Russian agencies. "There were no combat missions in Kramatorsk, and none were planned today."

On the station forecourt lay the remains of a rocket with a Russian inscription that can best be translated as "for our children". The rocket might have been intended as retaliation for children who, according to Russian claims, were killed by the Ukrainian army in Donbass. There is no evidence for this.

After the war crimes in Butscha became known, European Commission President Ursula von der Leyen traveled to the Kiev suburb. She is the first Western top politician to get an idea of ​​the situation on site. Among other things, she looked at 20 exhumed bodies from a mass grave and lit candles in a church for the victims of the massacre.

After a long train ride, von der Leyen and her delegation reached Kyiv earlier. There she wanted to meet with President Selenskyj, among others . On the way, she said the trip was a "clear sign of support for Ukrainians." The country urgently needs help.

The Russian government has declared 45 employees of the Polish mission abroad to be "undesirable persons" . This is her reaction to the expulsion of Russian diplomats from Poland. Diplomats at the Polish Embassy in Moscow and at the Consulates General in St. Petersburg, Kaliningrad and Irkutsk are affected. The Russian Foreign Ministry announced today. Two Bulgarian diplomats were also expelled from Russia in response to previous punitive measures.

Russia proposes Belarus as guarantor of protection for Ukraine

Russian Foreign Minister Sergey Lavrov has proposed Belarus as guarantor of protection for Ukraine in the post-war period. "At the request of the Ukrainian side, their neutral, non-aligned and non-nuclear status should be accompanied by security guarantees," Lavrov said. "We propose that the Republic of Belarus should, of course, be among the guarantor states ." However, it is at least doubtful whether Ukraine will agree to this.

Belarus is considered the last dictatorship in Europe, ruler Alexander Lukashenko is completely loyal to Putin and one of the most important allies of the Russian President . Russian soldiers had also started the attack on Ukraine from Belarusian soil.