Presidential Election In France: French Media Are Calling For The Election Of Emmanuel Macron 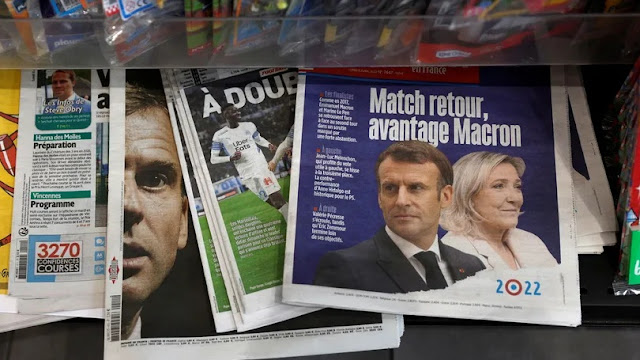 Several media outlets have positioned themselves for Macron in view of a possible victory for Marine Le Pen. Left-wing and conservative newspapers took the unusual step.

A day before the decisive final round of the presidential election in France, numerous media called for Emmanuel Macron to be elected. Referring to the war in Ukraine, the daily Le Parisien wrote about Macron's right -wing opponent Marine Le Pen: "Is it appropriate to elect a populist candidate who, by her willingness to break this major crisis, would add more?"

Le Pen's victory would mean the opposite of the national unity that is needed, the paper continued. Their economic policy is not counter-financed, their foreign policy makes France an unreliable partner.

The conservative newspapers Le Monde and Le Figaro warned against feeling safe because of Macron's lead in polls. "A massive absenteeism from the election should not ruin this crucial moment in our history," the Figaro said.

"Disaster scenario of a xenophobic president"

Le Monde wrote that any relativization was misplaced. There's too much at stake. "There is only one way on Sunday to help prevent a far-right party candidate, Marine Le Pen, from coming to power: voting for her opponent, Emmanuel Macron.

"This applies regardless of what mistakes the current head of state has made and what responsibility he has for the strength of the right. "Neither the abstention nor the absence will be of any use in saving our country from the worst."

The left-leaning daily Libération also spoke out firmly against the abstentions, which a sizeable proportion of left-wing voters tend towards, and explicitly called for the Liberal Macron to be elected. Not voting or casting a blank ballot is "less than nothing," an "empty banner." Those who are always the first victims would be thrown into the flames.

"What use is good slogans for migrants, public schools or biodiversity during the year if the fight is abandoned on the only day on which a massive mobilization can prevent the catastrophic scenario of a xenophobic and climate revisionist president?" the paper wrote.

Major media calls for specific candidates to be elected are a tradition in the US but unusual in France. Macron is several percentage points ahead of Le Pen in most polls – but there is no sign of a clear victory like in 2017, when he received 66 percent of the vote and Le Pen 34 percent.