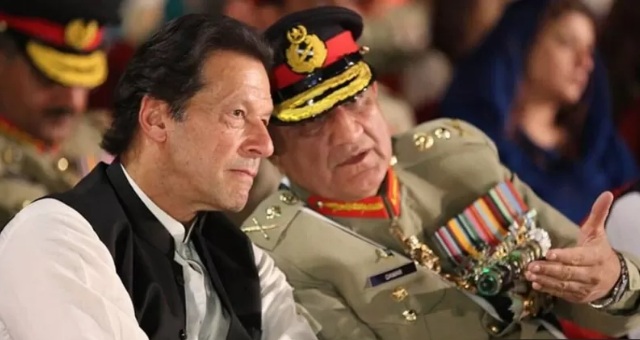 A majority of MPs voted in favor of a motion to overthrow the prime minister. Opposition leader Shehbaz Sharif could become his successor.

Pakistan's parliament has ousted Prime Minister Imran Khan with a vote of no confidence. 174 out of 342 deputies voted against Khan, as the speaker of the parliament, Sardar Ayaz Sadiq, announced in the capital, Islamabad. Khan is the first prime minister in  Pakistan's history to be ousted by a no-confidence vote.

It is still unclear when a new head of government will be elected. The head of the opposition Muslim conservative party PML-N, Shehbaz Sharif, is considered the favorite for the post. He thanked the supporters for their fight after the vote of no confidence: "Pakistan will rebuild this unity," said Sharif.

The vote was initially delayed further and further by Parliament Speaker Asad Qaiser, who chaired the session. The heated debates between the government and the opposition were interrupted several times. When Qaiser, who belongs to Khan's ruling party, surprisingly resigned, MPs were able to vote.

Amid the uproar of the no-confidence motion against the Prime Minister, Saturday night saw extraordinary activity in the Prime Minister's House, during which some historic decisions and events took place, some in front of the cameras and most in closed rooms. Parliament House was the center of activity throughout the day on Saturday, with speeches sometimes held and meetings adjourned, with government and opposition members holding talks between the Speaker and the National Assembly.

But in the evening, when the National Assembly session was adjourned for Iftar, the Prime Minister's House suddenly became the center of activity. Prime Minister Imran Khan convened an emergency meeting of the federal cabinet, along with his legal and political advisers, the speaker and deputy speaker, and some bureaucrats. The cabinet meeting approved the release of the alleged cable to some officials, which former Prime Minister Imran Khan said contained details of a US plot to overthrow his government.

The sudden arrival of these uninvited guests was unexpected for the Prime Minister. Imran Khan was waiting for the helicopters but his guesses and expectations about the passengers of this helicopter proved to be completely wrong. Sources said that the former prime minister was expecting that his newly appointed officials would reach the Prime Minister's House in this helicopter and after that the noise which started from Parliament House after the Supreme Court decision would subside.

It may have happened, but the problem was that the legal document (notification) that should have been issued by the Ministry of Defense for this highest dismissal and a new appointment could not be issued, thus thwarting the Prime Minister's House's attempt at this 'revolutionary' change.  The locks of the Islamabad High Court were unlocked on Saturday night and the staff of Chief Justice Athar Minallah reached the High Court.

It was informed that the High Court is scheduled to hear an urgent petition in which, as an ordinary citizen, Adnan Iqbal Advocate challenged in the court the 'possible' notification of removal of the Chief of Army Staff by Prime Minister Imran Khan. The urgent petition said that Imran Khan had misused his powers for political and personal purposes and recommended the removal of the Chief of Army Staff, therefore the court should quash the order in the best public interest.

It is important to note here that this request was prepared but left blank in place of the notification number for the removal of the Chief of Army Staff. The reason for this was that despite the request of the Prime Minister, the notification could not be issued and thus it was not the turn of hearing on this petition.

Democracy in Pakistan is a joke. None of Pakistan's 21 former prime ministers has completed his five-year term due to Pakistani Army. The Guinness Book of World Records should pay attention

Khan accused the United States of wanting to overthrow him

Khan tried last Sunday to stop the no-confidence vote against him by dissolving parliament and calling new elections. However, the Supreme Court ruled this unconstitutional and ordered the National Assembly to hold the vote of no confidence at its next session.

Khan had previously announced that he would not recognize a successor government. He repeatedly accused the United States of wanting to overthrow him and his government. However, he provided no evidence of this. These could not be made public because they are classified as classified, government officials said. The alliance of opposition politicians driving the no-confidence vote accused Khan of poor governance and incompetence on economic issues. Recently, the prices for food, petrol and gas in Pakistan have risen sharply.

In Pakistan Power has always been with generals and landlord

In Pakistan's political history, all military dictators or civilian governments except Quaid-e-Azam and Liaquat Ali have been unconstitutional. The Muslims of the subcontinent are not in the mood to follow the constitution and the law. Therefore, this issue will not be a major political issue for the PTI.