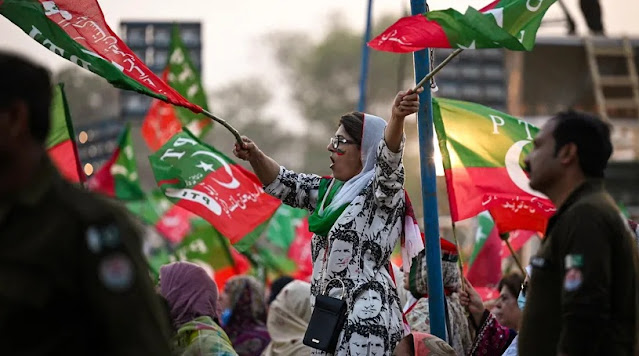 Pakistan's prime minister, Imran Khan, who is under pressure, is asking the head of state to create the conditions for new elections. He had previously escaped a no-confidence vote.

Pakistani President Arif Alvi has dissolved parliament, thereby creating the conditions for early elections. These must now take place within 90 days. A few hours earlier, Prime Minister Imran Khan had managed to avoid being removed from office by a vote of no confidence that was considered certain.

The Vice President of Parliament and Khan ally Qasim Suri had rejected the planned vote on a no-confidence motion by the opposition as unconstitutional. Khan himself then said on television that he had asked the President to dissolve Parliament. The population should be prepared for new elections.

In addition, a few days ago, Khan's government lost the support of coalition partner MQM-P. More than a dozen MPs from Khan's PTI party had also announced that they would withdraw their support for the prime minister. As a result, the government no longer had a majority in parliament.

The opposition parties had called on the former prominent cricketer to resign ahead of the planned no-confidence vote. Kahn had recently accused the United States of operating his downfall. He spoke of a foreign conspiracy to disempower him. Several anti-American protests followed the statements. The Washington government has denied the allegations.

Imran Khan rebelled against the country and the constitution

The United Opposition has said that Prime Minister Imran Khan today openly rebelled against the country and the Constitution, the punishment of which is enshrined in Article 6 of the Constitution. In a joint statement, the united opposition said it strongly condemned the "unconstitutional and non-parliamentary actions" and attitudes of all members of the government, including the speaker, and called them unconstitutional. The statement said that the united opposition has proved its clear majority in the House.

The opposition appreciated the move of the Chief Justice of the Supreme Court to take notice of the situation and said that it was hoped that the decision on Sunday's steps would be taken in accordance with the constitution.

Pakistan's Prime Minister Imran Khan has said in a tweet that he was "surprised" by the Pakistan Democratic Movement's response to our announcement of the general election. Imran Khan wrote that he had raised the sky that our government has failed and lost its support and popularity among the people, then why are they now afraid of elections?

Democrats always turn to the people for support

The Supreme Court of Pakistan has adjourned the hearing on the political situation suo motu notice case till tomorrow (Monday) and issued notices to the Ministry of Defense and the Ministry of Interior, including the Attorney General of Pakistan.

The case was briefly heard by a three-member bench headed by Chief Justice of Pakistan Omar Ata Bandial and comprising Justice Ijaz-ul-Ahsan and Justice Muhammad Ali Mazhar. During the hearing, the court remarked that political parties should remain peaceful and no unconstitutional action should be taken. The Chief Justice said that he had decided to take notice of what happened in the National Assembly on Sunday.

The court directed the concerned authorities to maintain law and order so that no one could take advantage of the situation, be it political parties or institutions. The Chief Justice remarked that any decision taken by the President or the Prime Minister would be subject to the order of the Supreme Court. The court directed the Secretary Defense and the Home Secretary to ensure law and order situation in the country. The case is set to be heard at 11 a.m. tomorrow.

Decisions of politics are not made in court, court should not be made: Fawad Chaudhry

Pakistan Tehreek-e-Insaf (PTI) leader Fawad Chaudhry has said that the first of the main points of our case is that under Article 69 of the Constitution, the Supreme Court does not have the power to judge the rolling of Parliament. And this is the final discretion of the Speaker and there are several decisions of the Supreme Court in this regard.

Sometimes political parties are afraid to go to the people