Elections France 2022, The Second Round | Le Pen Is In The Lead In Most Of The French Overseas Territories 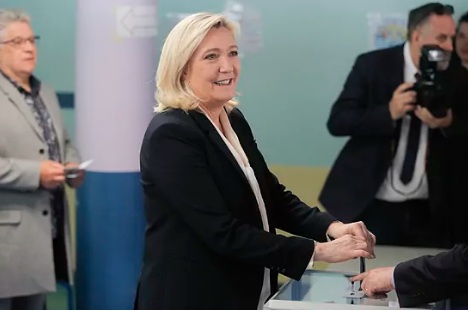 The far-right candidate achieved 69.6% of the votes in Guadeloupe and 61% in Martinique, which are some of the French territories that voted yesterday and whose results are already known.

France's far-right presidential candidate, Marine Le Pen, leads the current president and liberal candidate, Emmanuel Macron, in most of the French overseas territories, who voted in the second round of France's elections this Saturday due to the time difference in results published by the Belgian press this Sunday.

In Guadeloupe, where the turnout was 47.18%, Le Pen got 69.6% of the vote against Macron's 30.4%, while both in Martinique (45.45% turnout) and in French Guiana, the leader of the National Association has received around 61% of the votes. In addition, Le Pen has won 55.52% of the votes in Saint Barthélemy and Saint Martin and 50.69% in Saint Pierre and Miquelon, while in French Polynesia voters have opted for Macron with 51 .81% of the votes.

The turnout in the second round of the elections in France is 26.41% at 12:00 noon, one point more than that registered in the first round of the elections at the same time. However, it is down compared to the 28% reached in the 2017 elections, according to data from the French Ministry of the Interior. The areas where participation is lowest are fiefdoms of Jean Luc Melenchon, such as Seine Saint Denis or Paris , which could confirm the low mobilization of that rebellious France.

The polling stations have opened at 8:00 a.m. to elect who will be their president. The French have two options: Emmanuel Macron and Marine Le Pen, the two candidates who received the most votes in the first round of the French elections, held on April 10.

The celebration this Sunday of the victory in the French elections of 2022 will take place in the event of victory for the liberal Emmanuel Macron in a single enclave, the Champ de Mars, and in all of Paris in the event that the far-right Marine Le Pen wins, which will tour the most emblematic points of the capital.

The current head of state had already tried to commemorate his triumph in 2017 on that esplanade at the foot of the Eiffel Tower, but the Parisian mayor's office denied his proposal on the grounds that the International Olympic Committee was going to inspect the place the following weekend.

For his part, Le Pen has gathered his faithful in the Armenonville pavilion, in the Boulogne forest, in the west of the capital. It is an old hunting lodge from the 18th century, rebuilt in the 19th and in the 20th it fully assumed its function as a modern reception space, surrounded by nature.