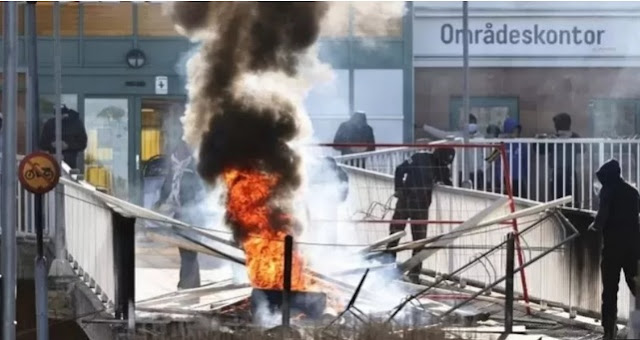 More than 40 people have been arrested so far in violent protests in Sweden following the announcement by a far-right group of plans to burn dozens of copies of the Quran.

The violent protests follow rallies by the extremist Danish-Swedish leader Rasmussen Peloden. Pelloden says he has burned the holy book of Islam and wants to do it again.

Saudi Arabia's foreign ministry has condemned in a statement "the deliberate desecration of the Quran and the provocation of Muslims." The statement added that "Saudi Arabia emphasizes the importance of joint efforts to promote dialogue, tolerance and coexistence, while advocating an end to hatred, extremism, abuse of all religions and sacred places."' Earlier, the governments of Iran and Iraq had summoned Swedish diplomats for desecrating the Quran.

Police said Monday that 26 policemen and 14 civilians were injured in the violence, which destroyed more than 20 vehicles. Police say about 200 people were involved in the violence. Police believe that criminal gangs are behind this and that some of their associates are already known to the Swedish security services and police.

'We have seen riots before but this is something else'

Swedish police chief Anders Tunberry said in a statement that the protesters did not care about the lives of police officers. "We have seen violent riots before, but this is something else," he said. He said he had not seen such riots before Sunday's clashes in Norping, 160km from Stockholm.

Rasmussen Pelodon had announced a rally on Sunday in Noor Koping, which led to clashes, but he did not arrive in the city. In a statement issued by his far-right party, Straum Kruss, Pelodon said he had canceled the rally because Swedish authorities had stated that "they are not in a position to ensure their safety and mine." Are '.

On Thursday, they arrived in the town of Junkoping, where, holding the Quran in their hands, as they began to speak into the microphone, the pastor of the local church began ringing the church bells in protest, silencing the payload.