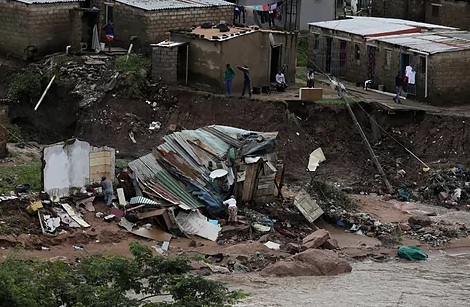 The authorities deploy military personnel to assist the population in order to prevent the chaos from causing looting and criminality.

At least 253 people have died in eastern South Africa due to severe flooding as a result of torrential rains in the region, where the country's president, Cyril Ramaphosa, traveled today to visit those affected.

The hardest hit region is the eastern province of KwaZulu-Natal, the third largest in the country, where the water has flooded homes and left many citizens incommunicado, without electricity and without running water.

"The greatest concern is the number of bodies we are finding. Until last night we had received 253 bodies in our morgues ," said Nomagugu Simelane, Health Minister of this South African province.

The port of that coastal city, which is the largest cargo shipping hub in the entire African continent , had to suspend its operations and many of the region's roads remain impassable.

The country's president is on the ground visiting the affected communities. "This situation asks us to come together as a nation and offer assistance to those who desperately need our support and care," said the president. The authorities have deployed military troops to try to assist the population and additional police contingents to prevent the chaos generated by the floods from degenerating into looting and criminality.

The rains began over the weekend and worsened on Monday. On today's day, rainfall continues to be recorded and the rains are expected to continue throughout Holy Week.

The material damage is very extensive and will amount to million-dollar losses, as anticipated by the head of government of KwaZulu-Natal, Sihle Zikalala, so the province hopes that the central government will soon declare a "state of disaster" in the area.

In 2019 this region also experienced torrential rains with floods that left around 80 dead at the same time.