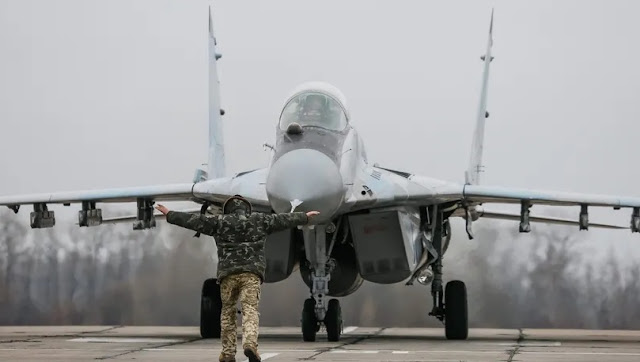 The delivery of the planes could be viewed by Russia as NATO intervention in the war. There are also logistical difficulties.

The US Department of Defense has described a proposal by Poland to hand over MiG-29 fighter jets to Ukraine with an intermediate stop at a base in Germany as "unsustainable".

The proposal entails "difficult logistical challenges" and there are "serious concerns" about the geopolitical dimension, Pentagon spokesman John Kirby said on Tuesday evening (local time). At a Senate hearing, a top State Department diplomat, Victoria Nuland, described Poland's offer, which had apparently not previously been agreed with Washington, as a "surprising move".

The Polish Ministry of Foreign Affairs declared on Tuesday evening that the government was prepared to transfer all MiG-29 combat aircraft to the US Ramstein Air Force Base in Rhineland-Palatinate immediately and free of charge and to make the machines available to the United States.

At the same time, the United States is being asked to provide the country with used aircraft with the appropriate operational capability, it said.

Kirby stated the Pentagon was in contact with Warsaw following the Polish statement. The decision to let Ukraine have Polish fighter jets is ultimately a matter for the Polish government. But the proposal underscores "the complexity of this issue," Kirby said. The idea that fighter jets that had been handed over to the US military would fly from a US or NATO base in Germany into contested Ukrainian airspace during the war with Russia "raises serious concerns for the entire NATO alliance," he said Kirby onward.

"It's just not clear to us that there's a valid justification for it." In the unusually clear statement, Kirby added that the US would continue to discuss the issue with Warsaw and NATO allies, but did not believe Poland's proposal was "tenable". The United States, Germany and numerous NATO allies are supporting Ukraine by supplying weapons and equipment for the Ukrainian military.

Warsaw has repeatedly ruled out direct delivery of the planes to the neighboring country, which Russia could interpret as direct intervention in the war. "Decisions on the delivery of offensive weapons must be made unanimously at NATO level," said Prime Minister Mateusz Morawiecki in Oslo on Tuesday evening. Poland cannot take any independent steps because it is not involved in this war.

Federal Foreign Minister Annalena Baerbock expressed reservations about the considerations on Tuesday. One must ensure that this war does not spread to NATO territory, said Baerbock in "Bild-TV". Even with weapons deliveries, no steep template should be given for saying "we are taking part in the war," said the Green politician.

According to reports, Kyiv asked for the planes because the pilots of the Ukrainian Air Force are trained to fly the models initially developed in the former Soviet Union. A possible transfer of the fighter jets has also been discussed with the US government for days. The White House always emphasized that it was a decision by Poland as a sovereign state.

US Vice President in Poland and Romania

"We have in no way opposed Poland transferring planes to Ukraine," said US President Joe Biden's spokeswoman Jen Psaki on Monday. However, "a number of challenging practical questions are associated with the project. "From where will they take off? Where will they land? These are all very important questions here," Psaki stressed. The "rather complicated logistics" of supporting Poland with other combat aircraft after a possible transfer to Ukraine are being examined, she said.

Russia warned on Sunday that it would be considered interference in an armed conflict if states allowed Ukrainian planes to land on their airfields, which then attacked Russian forces.

US Vice President Kamala Harris is scheduled to visit Poland and Romania this Wednesday to support the "strength and unity" of NATO and US support for the Eastern European partner states in the face of the Russian war of aggression, as the White House said last week would have.