Russia: Was China Aware Of Russia's Plans To Invade Ukraine? 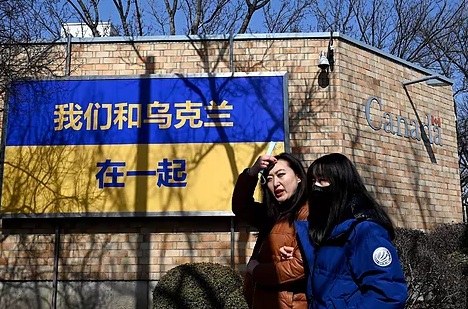 The New York Times echoes an intelligence report according to which Chinese officials asked their Russian counterparts not to invade Ukraine before the end of the Olympics.

Less than 24 hours after the end of the Winter Olympics in Beijing, Vladimir Putin announced that he recognized the independence of the self-proclaimed breakaway republics of Donetsk and Lugansk. Four days later, Russia had already unleashed a triple invasion of Ukraine from the north, east and south.

There were many rumors that senior Chinese officials, before the start of the Games, had asked their Russian colleagues not to provoke any military conflict in Ukraine during the Olympics. From Moscow, officially, they denied those rumors. From Beijing, they kept silent.

On February 4, a few hours before the opening ceremony of the Olympic Games, Vladimir Putin and Xi Jinping had a long talk in Beijing, from which came a surprising joint statement that put words to the increasingly solid union "without limits". between China and Russia. The name of Ukraine was not mentioned in the letter. If Xi's support for Putin was reflected in his demand that NATO curb its expansion in Eastern Europe.

After Moscow attacked Ukraine, much has been said about whether the Chinese president really knew of Putin's intentions. Some analysts believe that Beijing was aware of all Moscow's plans. Others are more in favor of the theory that China was also caught by surprise by the Russian invasion.

The latest information in this regard, which would confirm the rumors that were circulating in Beijing during the Games, has been published by the New York Times based on an intelligence report: high-ranking Chinese officials asked their Russian counterparts in early February not to invade Ukraine before the end of the Olympics. In other words, Beijing was aware of Putin's final intentions.

The intelligence report (from a Western agency, but confirmed with White House sources) indicates that Chinese officials had some level of knowledge about Russia's plans or intentions to invade Ukraine before Russian President Vladimir Putin launched the operation last week. "The claims mentioned in the reports are baseless speculations and are intended to blame and smear China," Liu Pengyu, spokesman for the Chinese embassy in Washington, said on Thursday.

The New York Times also reported a few days ago that US officials had asked China to help stop the war in Ukraine by sharing intelligence on Russia's troop buildup, but that their Chinese counterparts rejected that information, even passing it on to Moscow. There have been several media, both from Washington and Beijing, which have assured that the advisers that Xi Jinping listens to dismissed the risks of an invasion because they did not believe that Putin would start a war.

"China probably failed to predict the war. Even many top Russian intelligence and military officials, as well as many top Russian experts, did not see it coming. Given the deep mistrust of the US, China probably dismissed the information shared by Washington," says Tong Zhao, a member of the Nuclear Policy Program at the think tank Carnegie Endowment for International Peace. Beijing is in a difficult position, caught between Russia and the West. At no time has he shown his direct support for Russia, but neither has he condemned the attack or spoken of an invasion. He is trying to balance the efforts of his growing alliance with Putin and his historic ties to Ukraine. Although, while putting himself in profile, he has already twice abstained from voting on the UN Security Council resolution demanding that Russia stop its attack on Ukraine.

"THEY ARE TOO CLOSE TO THE RUSSIANS"

On Tuesday night, Minister Wang Yi had a talk with his Ukrainian counterpart Dmytro Kuleba, urging Kiev to find a solution by negotiating with Moscow. According to the Ukrainian Foreign Ministry, Wang said that China was ready to step up diplomatic efforts to end the war in Ukraine. He expressed Beijing's readiness to do everything possible to end the war as new explosions continue to hit the capital, and reaffirmed China's support for Ukraine's sovereignty and territorial integrity. "We await China's mediation to reach a ceasefire," Kuleba urged.

"Until now, China has denied that Ukraine has even been invaded and has repeated Russia's euphemisms, such as that it is a special operation. So, to say now that it would negotiate a deal would imply acknowledging that an invasion has taken place, and that is in itself a radical change for China", analyzes for this newspaper Ian Johnson, Pulitzer Prize winner for reporting on the Asian country and senior member of the think tank Council on Foreign Relations, based in New York.

"My feeling is that the Chinese Foreign Ministry's initial reaction was to use common pro-Russian and anti-Western rhetoric, but that the central government had not come to a definitive position. Now, they seem to have realized that they are too close to the Russians, especially when reports of war crimes are circulating. China is trying to position itself as a go-between. Could it be an honest broker? It's hard to say, as China hasn't really played this role before, but the Ukrainians seem to believe it," says Johnson.

As international demands mount for China to try to dissuade its partner Putin from continuing to attack Ukraine, the world's second-largest power faces a dilemma that could overshadow its big legislative session, the only one it holds each year, which begins this Saturday.