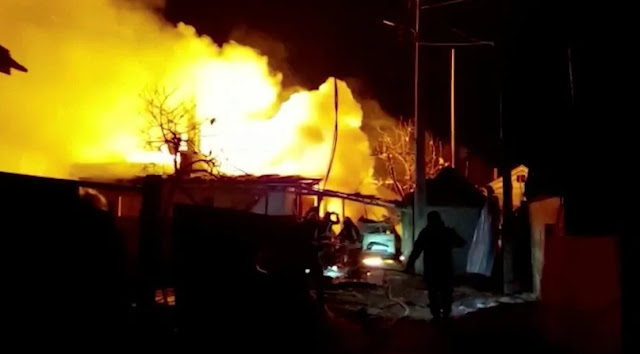 According to Ukrainian sources, several buildings were damaged in the city of Zhytomyr. Fighting is also reported from Kharkiv.

Ukraine has reported new attacks on its second largest city, Kharkiv. Russian airborne troops attacked a local hospital, the Ukrainian army said on the Telegram news service. "There is a fight going on between the invaders and the Ukrainians."

At Kharkiv, the Ukrainians managed to capture six new Russian T-80BWM tanks. The statements by both parties from the war zone about casualties or military successes cannot be independently verified.

Several buildings, including a hospital, were damaged in the city of Zhytomyr, the Ukrainian news agency Unian reported. According to the authorities, two people were killed and ten injured. Interior Ministry adviser Anton Herashchenko had previously spoken of four dead. The attack was therefore the stationed in Zhytomyr 95th Brigade. Videos shared on social media showed burning houses and rescue workers. Zhytomyr is around 140 kilometers west of the capital Kiev. According to Mayor Vadym Boychenko, more than 100 residents were injured in air raids in the port city of Mariupol in south-eastern Ukraine. "The number of wounded civilians is growing every day," Boychenko said, according to the Unian agency. "Today there are 128 people in our hospitals. Our doctors don't even go home anymore." Recently, the situation in the city had initially improved, but then a new attack took place.

US President Joe Biden announced that US airspace, like the EU and Canada before it, would be closed to Russian aircraft. This will further isolate Russia and further increase the economic cost to Moscow, Biden said in his first official State of the Union address . "Russia's economy is reeling." Vladimir Putin alone is to blame for this, he said before both chambers of the US Congress in the Capitol in Washington, looking at the Russian president.

Russian President Vladimir Putin reiterated his terms for ending the invasion. The government in Kiev must recognize the self-proclaimed People's Republics of Luhansk and Donetsk and Russia's sovereignty over the Black Sea peninsula of Crimea.

The International Court of Justice in The Hague will hear Ukraine's lawsuit against Russia next week . As the court announced, it is about the "suspicion of genocide".

Because of their coverage of the invasion of Ukraine, Russia's media regulator has blocked two channels. They would spread "intentionally false information".

The European subsidiary of the Russian Sberbank, which is affected by sanctions , has to stop operations. The Vienna-based bank had to end all transactions with immediate effect, the Austrian financial market authority announced.

Around 1,300 refugees arrived at Berlin Central Station on trains from Poland. Helpers provided them with food and drink.

According to its own statements, Apple is no longer selling any products in Russia for the time being. The US sporting goods manufacturer Nike also stopped online sales in the country. The aircraft manufacturer Boeing no longer wants to maintain Russian aircraft.

The US oil company ExxonMobil wants to give up its oil and gas production business in Russia. The company follows its competitors BP and Shell with the withdrawal. 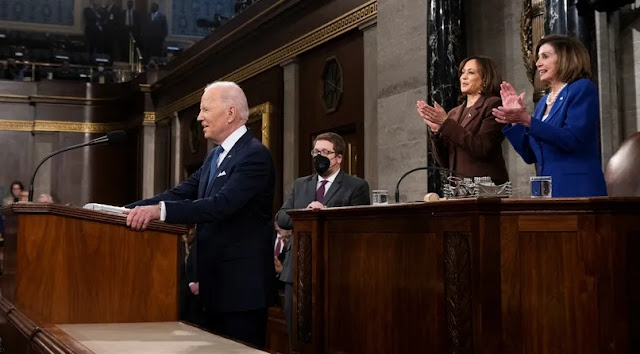 An announcement to Putin

Don't underestimate the power of democracies: That's the message of US President Joe Biden's State of the Union address. She must also find her strength in her own country.

It is an image from a bygone era: a US President standing in front of the assembled Congress and receiving a standing ovation from politicians from both parties. Such unity has not existed in the United States for a long time - Republicans and Democrats are so far apart on every policy issue that even at the minute's silence in the House of Representatives to mark the anniversary of the storming of the Capitol, only two Republicans stood: Liz Cheney and her Father Dick Cheney.

But when Joe Biden spoke on Tuesday in his State of the Union address about Russian President Vladimir Putin and his war against Ukraine, everyone was actually standing in the House of Representatives. "Putin thought he could invade Ukraine and the world would overturn. Instead, he met a wall of strength he could never have imagined. He met the Ukrainian people." Most Republicans can then gather behind this message. However, some of them boycotted the President's speech and didn't even show up. But that remains a side note tonight. Because this speech is a speech by Joe Biden probably didn't think he would ever hold her. But he is the right President for it.xxxxxxxxxxxxxxxxx

Biden is not a strong speaker, not a charismatic who captivates listeners with his rhetoric. And the State of the Union Address, which is so important in the US tradition, always focuses primarily on domestic political issues. But then Biden speaks clearly, long, consistently and powerfully about the war in Ukraine , dictator aggression and the importance of the transatlantic alliance. There's nothing in it that he hasn't said in the past few days. But on this stage their effect is even greater. And while the President is speaking in the United States that evening, people are dying on the Ukrainian night. That's why it's important for Biden to say phrases like this: "Putin was wrong. We were ready. We are united."

Biden is also the right president because, at a moment when the world order has changed, he has the experience and the will to focus on communion with Europe and the West - not division. Perhaps Biden will be the last President of the United States to so unequivocally affirm multilateralism at a moment of greatest crisis and in the face of an unpredictable aggressor like Putin. Because the picture of relative unity in Congress that evening cannot hide the fact that the strength that Biden's message needs is not guaranteed in its own country. Opposing Putin and others - the President also mentions China when it comes to global economic competition - will also take a toll on the citizens of the United States. And the mood in the country is bad, Americans are worried about economic well-being and rising prices. Currently, a gallon of gasoline costs an average of $3.60. In March 2021 it was $2.90 for the equivalent of just under 3.8 liters. "I got that," says Biden. "So my top priority is to get prices under control."

But Biden omits this clear message that the price of democracy at home is not only to be paid in expressions of solidarity. The important midterms are in eight months, his party is under pressure before the elections. Biden's poll numbers are the worst of any president at this point, except Donald Trump. The pandemic is not over yet, and as a result there has been so much talk about petrol prices for weeks. The democratic president's reforms are also stuck due to conflicts in his own party, and questions of justice and equality also remain unanswered by this government. In addition, there is this far-off war, which must also cause great concern in the USA.

Biden tries to be optimistic in his speech, talks about America's transformation and promises everything from fighting gun violence and crime in the country to better education. It's all part of a State of the Union address.

Joe Biden must now show that he follows this speech with action. Even if that comes with the risk of getting little applause for it domestically. Strengthening and protecting democracies has been Biden's ideological message to his country for the past year. She's being tested like never before. And it has never been more important for our own citizens to listen to their President.