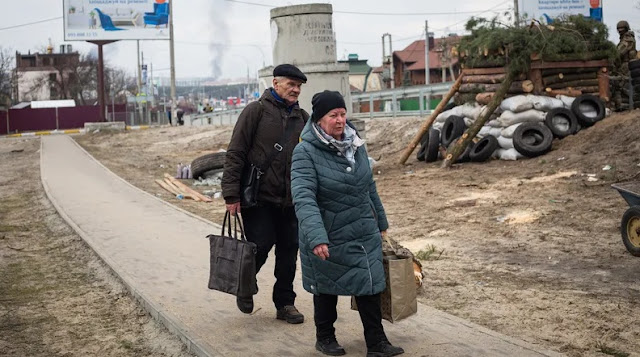 The government in Kyiv does not see corridors to Belarus or Russia as an option. Ukrainians should be able to be evacuated within the country.

The Ukrainian government rejects an evacuation of civilians according to Russian ideas. The Russian army's proposal means that many of the corridors will lead into Russian or Belarusian territory. "This is not an acceptable option," said Ukrainian Deputy Prime Minister Iryna Vereshchuk. The civilians "would not go to Belarus and then flee to Russia," she said.

Russia had announced the establishment of escape corridors from Kiev, Kharkiv, Mariupol and Sumy, which should lead to Russia or Belarus. For this purpose, ceasefires should apply in the contested cities.

The destinations of the refugees would be, for example, the Belarusian city of Gomel, which is close to the border with Ukraine , and Rostov-on-Don in Russia. There should be a corridor between Kharkiv and the Russian city of Belgorod. Next two corridors should lead either to Belgorod or to the Ukrainian Poltava.

Vereshchuk appealed to French President Emmanuel Macron not to be used by Russia. The government in Moscow had said that by creating the corridors it was responding to a personal request from Macron. The government in Kyiv immediately criticized the plan as immoral. "People's suffering is used to create the desired TV images," said a written statement from President Volodymyr Zelenskyy's spokesman . "They are citizens of Ukraine, they should have the right to be evacuated to Ukrainian territory."

According to the Ukrainian government, there should be a third round of negotiations with Russia on escape corridors on Monday. However, no agreement is expected as long as there are further Russian troop advances, said adviser to the head of the Ukrainian presidential staff, Oleksiy Arestovich. He advised his countrymen against fleeing to Russia.

The creation of an evacuation corridor from the surrounded Mariupol failed twice over the weekend, most recently on Sunday. Russia and Ukraine blamed each other for this.

Here's a summary of the day so far:

Ukraine's Marine Corps Command said in a statement on Facebook that it had destroyed at least 30 Russian helicopters near Kherson and Mikulov on Monday morning. The statement said Ukrainian troops opened fire on an airfield near Kherson where Russian forces were temporarily stationed. "At least 30 enemy helicopters, manpower and vehicles have been destroyed." According to these reports, three convoys were destroyed in the vicinity of Mikulov and Ukrainian forces also confiscated Russian military equipment.

Hungarian Prime Minister Viktor Orbán has announced via Facebook that arms exports from Hungary to Ukraine will be banned by decree. This sets Orbán apart from several EU countries, including Germany, which support the Ukrainian army with armaments. Last week, Hungary did not veto the European sanctions against Russia, and Orbán had condemned the attack on Ukraine.

According to the Russian state agency TASS, another Russian delegation has flown to Belarus. A third round of negotiations is to take place there in the afternoon, the exact time is still unclear. Most recently, representatives from Russia and Ukraine met in western Belarus on Thursday and agreed on escape corridors for embattled cities. However, two attempts to evacuate people from the port city of Mariupol failed over the weekend. Both sides accuse each other of breaking the agreed ceasefire.

Apparently the first meeting at foreign minister level since the beginning of the war Foreign ministers from Ukraine and Russia could meet for the first time since the outbreak of war on Thursday. As the Turkish Foreign Minister Mevlut Çavuşoğlu announced, Dmytro Kuleba and Sergey Lavrov want to meet in Antalya for talks. Turkish President Recep Tayyip Erdoğan offered to mediate.