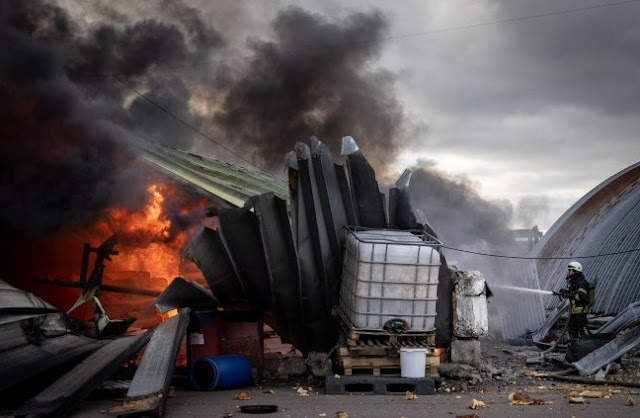 Turkey wants to bring Putin and Zelenskyj to a negotiating table

Turkey is trying to get talks between Russian President Vladimir Putin and Ukrainian President Volodymyr Zelenskyj. His government has invited both sides to come to his country and talk to each other, Turkish Foreign Minister Mevlut Cavusoglu said after a first meeting of foreign ministers of Russia and Ukraine in Antalya. Zelenskyj supports a meeting with Putin and Putin is also "not averse to it," said Cavusoglu. However, Russia insists that the meeting takes place in Belarus and not in Turkey.

Aid convoy for Mariupol has to turn back because of fighting

A aid convoy for Mariupol has had to turn back before the encircled city. The reason for this is continuous shelling, said Ukrainian Deputy Prime Minister Iryna Vereshchuk. The convoy was intended to get civilians out of the city and to safety. The Mariupol City Council wrote in a social media post: "Bombs are falling on houses."

Russia gives up participation in the Council of Europe

In response to Russia's suspension from the Council of Europe, the country no longer wants to participate in the work of the body. This was announced by the Russian Foreign Ministry in Moscow today.  Russia will not participate in the transformation of Europe's oldest organization by NATO and its obedient EU into another platform for Western domination and narcissism. They should have fun communicating with each other, without Russia.

"Withdrawal from the Council of Europe also entails the withdrawal from all mechanisms," said Kremlin spokesman Dmitry Peskov, according to the Interfax agency, when asked whether Russia would no longer comply with the judgments of the European Court of Human Rights. States opposed to Russia would abuse their majority in the Committee of Ministers with representatives of the 47 member states and thus continue the "annihilation" of the Council of Europe, the Russian Foreign Ministry claimed. Russia repeatedly complains about alleged discrimination.

The body reacted to the Russian attack on Ukraine a good two weeks ago by suspending it. This decision was considered historic. Russia temporarily lost its rights of representation in the Strasbourg organization. However, the country will remain a formal member until the end of the financial year, Russian politicians stressed in Moscow.

According to his own words, Russia's Foreign Minister Sergei Lavrov referred to his country's proposals already submitted during his talks with his Ukrainian colleague Dmytro Kuleba. They want an answer to that, says Lavrov after the meeting. Humanitarian issues were also discussed.

The Russian government is always ready for further meetings - "but not for the sake of it," said Lavrov. However, Ukraine has not implemented the decisions made so far, Ukraine only wants to cover it up, the Foreign Minister claimed. President Vladimir Putin does not refuse to talk to Volodymyr Zelenskyy. But before that, the preparatory work has to be done. Until recently, Russia tried to find a solution through diplomatic channels. But the Russian proposals were never accepted.

At the same time, he criticized arms deliveries from NATO countries to Ukraine. "We see what our Western colleagues are doing and how they are acting ," Lavrov said. They violated their own values. "Those who deliver arms to Ukraine must understand that they are then responsible." There is a risk that the weapons will also get into the hands of terrorists.

The British government has sanctioned seven oligarchs, freezing their funds and imposing a travel ban on them. These include current Chelsea owner Roman Abramovich, as well as billionaires Igor Sechin, CEO of state-owned oil company Rosneft, and Oleg Deripaska. All three are said to be close to Russian President Vladimir Putin.

Prime Minister Boris Johnson said there could be no safe havens for those who supported an invasion of Ukraine. There is a lot of Russian money in London, which has a significant influence on British politics, as Bettina Schulz reported here . In addition, the recently announced sale of the Chelsea football club was seen as a preventive measure by the oligarch Abramovich, since sanctions were expected to be imposed in the near future.

China has refused to supply Russian airlines with spare parts for planes, according to the Russian aviation security agency Rosawiazia. An attempt will be made to procure spare parts from other countries such as India or Turkey , the Russian news agency Interfax quoted a spokesman for the authority as saying. Other Russian news portals also reported on it. There was initially no official confirmation from China.

In Ukraine, civilians have been allowed to use weapons to repel the Russian attack. Foreigners and stateless persons living legally in the country can also receive weapons and use them against Russian soldiers, Ukrainian media reported. The issue of weapons is regulated by the Ministry of the Interior. According to the law, issued weapons and ammunition stocks should be returned no later than ten days after the end of the current martial law.

Especially in Kiev, in the first days of the war, assault rifles and ammunition were already arbitrarily distributedissued. Observers feared that Russia could justify civilian casualties with the threat posed by armed civilians.The Kremlin in Moscow criticized the permission that has now been granted. "If someone attacks a Russian soldier with a gun in his hand, then he too becomes a target," the Kremlin said.

According to the Ministry of Defense in Moscow, Russian troops have so far destroyed 2,911 military infrastructure facilities in Ukraine. The Russian army has also taken control of some neighborhoods in the besieged city of Mariupol, ministry spokesman Igor Konashenkov said, according to Russian news agencies.

Russia has repeatedly stated that it will only attack military targets in what it calls what it calls a special military operation. The Russian leadership rejects allegations that civilian targets such as hospitals and schools were also hit.