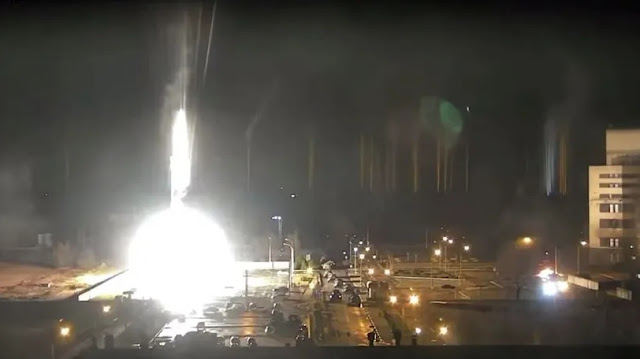 According to its operators, Europe's largest nuclear power plant has been hit by shells. According to the authorities, the situation was brought under control.

After a fire, the situation in Europe's largest nuclear power plant in Zaporizhia, Ukraine, which was hit by a Russian attack, is "secured" according to the authorities.

The manager of the power plant said that firefighters had reached the plant, the head of the regional military administration, Oleksander Staruch, wrote on Facebook on Friday night. According to the power plant management, the fire broke out in a building for training events and a laboratory.

Ukrainian President Volodymyr Zelenskyy said in a video speech that tanks had fired on the reactor blocks of the nuclear plant. "Europe's largest nuclear power plant is on fire," Zelensky said. "There are tanks equipped with thermal imaging cameras. That means they know where they're shooting, they've prepared for it." These statements could not initially be verified independently.

The International Atomic Energy Agency (IAEA) said that according to the Ukrainian government, no increased radioactivity had been measured in the vicinity of the plant. The authority called for an end to all hostilities around the nuclear power plant and warned of "serious danger" if reactors were hit. US Secretary of Energy Jenniver Granholm said the power plant's reactors would be shut down safely. "There are no elevated levels of radiation near the facility," she wrote on Twitter. The reactors are secured by a robust protective cover.

A spokesman for the power plant had previously said shells had fallen directly on the plant in Zaporizhia, setting one of the six reactors on fire. This is being renovated and is not in operation, but there is nuclear fuel in it, the spokesman said. "There is a real threat to the largest nuclear power plant in Europe."

US President Joe Biden called on Russia to end its military activities in the area around the Zaporizhia nuclear power plant. In a phone call with Zelensky, Biden asked "about the current status of the fire" at the nuclear facility, the White House said. The Russian army must allow firefighters and rescue workers access to the site, Biden said. The US President also spoke to the head of the US National Administration for Nuclear Safety, Jill Hruby.

Live stream shows armored vehicles in front of the facility

Ukrainian Foreign Minister Dmytro Kuleba wrote on Twitter that the Russian army was shooting at the facility "from all sides". "The fire has already broken out. If it explodes, it will be ten times bigger than Chernobyl." On April 26, 1986, one of the worst catastrophes in the peaceful use of nuclear energy occurred at the Chernobyl nuclear power plant in the Ukraine . After the explosion of a reactor block of the nuclear power plant, radioactive substances spread over large parts of Europe over several days.

A live-streamed security camera, linked from the nuclear power plant's homepage, showed what appeared to be armored vehicles rolling into the plant's parking lot and floodlighting the building where the camera was mounted. Then follows what looks like bright muzzle flashes from vehicles, and almost simultaneous explosions in the surrounding buildings. Then smoke rises and moves through the picture. The mayor of the nearby city of Enerhodar, Dmytro Orlov, reported more than 100 Russian military vehicles in the area.