Russia-Ukraine War: Russia Attacks On Military Base Near Polish Border 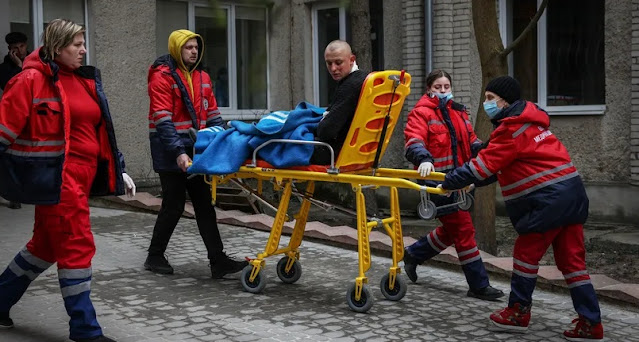 Nine people are said to have been killed in air raids on a military base near Lviv. The Russian army had not previously attacked this far to the west.

According to Ukrainian sources, the Russian army has attacked a military base near Lviv in the west of the country. Eight rockets were fired at the Yavoriv military training area, the regional administration said. "The occupiers have flown an airstrike on the International Center for Peacekeeping and Security," wrote the head of the regional administration, Maxim Kosizky, initially on Facebook.

In a later statement, he put the number of rockets fired at 30, several of which had been intercepted by Ukrainian air defenses. According to Kosizky, nine people were killed and 57 others injured. "These aren't just military men," he wrote. Army and security forces have already examined 25 impact sites. A fire is still being extinguished at the military base.

The 360 ​​square kilometer military base is one of the largest training facilities of the Ukrainian military and is located around 40 kilometers north-west of Lviv. According to Ukrainian Defense Minister Oleksiy Reznikov, foreign military instructors worked at the military base. However, it is not clear whether they were there at the time of the attack.

The nearby town of Jaworiw is only 25 kilometers from the Polish border. There has not been an attack by the Russian army this far in western Ukraine since the beginning of the war.

The base has so far served as a venue for international NATO exercises, and since 2015 the USA and Canada have regularly sent trainers to the field to train the Ukrainian military.

With an attack so far to the west, Russia wants to demonstrate that there is no safe place in Ukraine, the Ukrainian news agency Unian quoted MP Vadim Denisenko as saying. According to the New York Times, the base is part of the arms supply chain that Ukraine receives from NATO countries. On Saturday, Russia threatened that the arms deliveries were legitimate targets.

Another attack in western Ukraine

"This is a terrorist attack on peace and security near the EU-NATO border," Defense Minister Resnikov wrote on Twitter . According to the New York Times report, the injured have already been taken to an emergency clinic in Lviv. An eyewitness told Reuters news agency that 19 ambulances had left the base with sirens going and seven were on their way.

The Russian attacks had so far spread to the capital Kiev, the eastern metropolis Kharkiv and southern Ukraine. Lviv in the west is considered comparatively safe, and several countries have moved their embassies from Kyiv to the city. Many Ukrainians fleeing their homeland travel to the Polish border via Lviv.