Russia-Ukraine War Overview: Negotiations Interrupted, Warning Of Nuclear War - That Was The Day & Today So Far 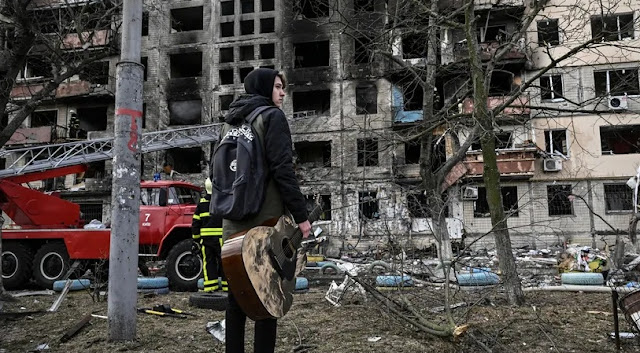 At the fourth meeting, too, the representatives of the warring parties adjourned without a result. The evening & today morning overview.

Once again talks between representatives of Russia and Ukraine on a ceasefire ended without concrete results. The delegates adjourned to Tuesday after a video conference lasting several hours.

The interruption is a technical break for talks in working groups and a "clarification of individual definitions," explained Ukrainian presidential adviser Mykhailo Podoliak. It was the fourth meeting. As during the talks before, the Russian troops continued their attacks meanwhile.

For the first time, a Russian military conceded that the advance was not going as quickly as the Russian side had hoped. "I would like to say that, yes, everything is not going as fast as one would like," said the head of the Russian National Guard Viktor Solotov. According to Ukrainian sources, the site of the Antonov Aircraft Works in Kyiv, known for its cargo planes, was shelled. There was heavy fighting north and east of Kyiv. According to Ukrainian information, around 160 cars were able to leave the heavily contested Mariupol. It was unclear how many people were brought to safety. According to pro-Russian separatists, at least 20 people were killed by debris from a Ukrainian missile in the eastern Ukrainian city of Donetsk. Ukraine dismissed the report.

The German government called on Russia again to break off the war of aggression. Defense Minister Christine Lambrecht (SPD) announced that the Bundeswehr Air Force would be equipped with F-35 stealth jets. The combat aircraft are considered to be the most modern in the world and are intended to replace the Tornado combat aircraft purchased by the Bundeswehr 40 years ago. Among other things, the F-35 is capable of dropping US nuclear bombs.

Russia had indirectly threatened to use nuclear weapons several times during the war. The United Nations also consider the danger of nuclear war to be current. "The prospect of nuclear conflict, once unthinkable, is now again within the realm of possibility," said UN Secretary-General António Guterres.

The United Nations High Commissioner for Refugees (UNHCR) has highlighted a high level of donations from private organizations to Ukraine. "In just under two weeks, corporations, foundations and philanthropists have provided more than $200 million" in humanitarian aid, UNHCR said. According to the organization, however, it needs more than 500 million dollars to deal with the largest refugee crisis in Europe since the Second World War.

According to the UN, more than 2.8 million Ukrainians have fled the country before Russian attacks. There are also at least two million internally displaced persons. The longer the Russian war of aggression lasts, the more people are forced to leave their homes. The UNHCR therefore assumed that the need for funding would undoubtedly continue to increase.

China does not want to be seen as

A party to the conflict China's Foreign Minister Wang Yi sees his country "not as a party" in the conflict over the Russian invasion of Ukraine. His government "doesn't want the sanctions to hit China," said the foreign minister in a phone call with his Spanish colleague José Manuel Albares, according to official sources. China rejects the imposition of sanctions in principle. "China has the right to protect its legitimate rights and interests," he was quoted as saying by the Foreign Ministry in Beijing.

Wang Yi called the conflict the result of an "accumulation and intensification of contradictions-over the years" in the European security architecture. Wang Yi did not respond to American reports that Russia had asked the Chinese government for military and economic aid after the start of the war in Ukraine. A Chinese foreign ministry spokesman had previously spoken of malicious disinformation from the USA spoken.

According to the IAEA, Chernobyl nuclear ruins have electricity again

According to the International Atomic Energy Agency (IAEA), the Chernobyl nuclear ruins, which were taken by Russian troops, have electricity again. "Ukraine has informed the IAEA that the external power supply to the nuclear power plant has been restored today," the IAEA wrote on Twitter . The Ukrainian energy supplier Ukrenergo had previously announced that the power supply to the plant and the city of Slavutysh had been damaged by Russian troops.

Since the Russian invasion of Ukraine, the Chernobyl nuclear ruins have been controlled by the government in Moscow. There is one in Chernobylreliable power supply required to ensure the safety of the fuel rods stored there.

Authorities put the number of civilians killed in Mariupol at 2,357

According to local authorities, more than 2,000 civilians have been killed so far in the besieged port city of Mariupol in south-eastern Ukraine. The city council said that 2,357 people have died since the Russian war of aggression began on February 24. Mariupol, with a population of around 400,000, has been surrounded by Russian units for days and cut off from the rest of the country. Ukrainian authorities are reporting heavy air strikes on the embattled city on the Azov Sea. Russia insists on only attacking military targets.

Mariupol is considered a symbol of the Ukrainian resistance. Since the beginning of the war in eastern Ukraine's Donbass in 2014fended off several attempts by pro-Russian separatists to take the city. Advisor to the mayor of Mariupol, Petro Andryushchenko, called the situation in the city inhumane: "No food, no water, no light, no heat." He fears many more deaths. As the attacks intensify, the number of victims could reach 20,000. The information is not independently verifiable.

The Ukrainian President has called on Russian soldiers to lay down their arms. We know from tapped telephone conversations between Russian soldiers and their families at home what many really think about this war. "I know you want to survive." He added, "I'm offering you a chance to survive."

He is grateful to those Russians "who don't stop telling the truth," Zelensky said, referring to anti-war protests in Russia. As an example, he cited a woman who had interrupted the main evening news program with a protest poster and loud shouts on Russian state television.

They had not expected such resistance. They believed their propaganda that has been lying about us for decades.

Zelenskyy said that Russia was beginning to realize that it would not achieve anything with the war. Within 19 days of the war in Ukraine, the Russian army had suffered higher losses than during the two Chechen wars. The information is not independently verifiable.

According to Ukrainian President Volodymyr Zelenskyy, negotiations between Ukraine and Russia should continue on Tuesday. The Ukrainian delegation did a good job on Monday, Zelenskyy said in a video speech. He didn't go into detail.

Despite the Russian attack on Ukraine, the US space agency Nasa has again confirmed further cooperation with the government in Moscow with regard to the International Space Station ISS. "We work together, we've been working together for more than 20 years and we will continue to do so," said NASA ISS manager Joel Montalbano at a press conference on Monday.

"We know what's happening, but we can go on with our work ," said the NASA manager. "Nothing has changed in the past three weeks, we don't see any impairments." The ISS is based on cooperation.

It is not a process where one group can go on without the other. Everyone has to work together for us to be successful.

The return of the US astronaut Mark Vande Hei, planned for the end of March, together with the cosmonauts Anton Schkaplerow and Pyotr Dubrov in a Russian Soyuz space capsule, will take place as planned, according to Montalbano. "I can tell you for sure that Mark is coming home on the Soyuz. We are in communication with our Russian colleagues on this, there is no fuss."

The other events of the day at a glance

After Britain, the EU is also sanctioning Roman Abramovich and other Russian oligarchs.

The IMF expects the Ukrainian economy to slump.

Chancellor Olaf Scholz (SPD) and Turkish President Recep Tayyip Erdoğan have called for a ceasefire in Ukraine. Both are "completely in agreement in condemning Russia's violent actions in Ukraine," said Scholz during his first visit to Turkey.

According to Russian information, the pro-Russian separatists in the Luhansk region are still encountering strong resistance from Ukrainian troops.

China's Foreign Ministry has denied reports that Russia asked the Chinese government for military and economic aid after the war began.

Dmytro Kuleba has called on the West to support his country with arms supplies and thus prevent the war from spreading to other countries.