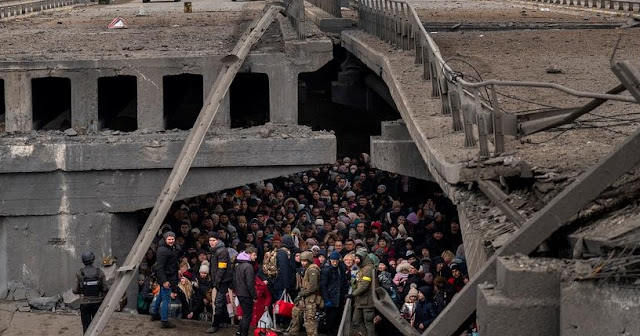 After a failed ceasefire, the besieged city of Mariupol reports dramatic conditions. Europe takes in refugees with no upper limit.

No electricity, no heating, many dead: The mayor of the port city of Mariupol, Wadym Boitschenko, complains of a "humanitarian blockade" and pushes for a corridor for the evacuation of the residents. The organization Doctors Without Borders speaks of a "catastrophic" situation after an agreed ceasefire was broken and an evacuation attempt failed on Saturday.

In addition, Russian troops are advancing on the capital Kiev and other cities, according to the Ukrainian General Staff. President Volodymyr Zelensky called on the Ukrainians to resist again. At the same time, the economic pressure on Moscow is growing: Mastercard and Visa are capping international credit card payments with Russia.

The other events of the last few hours in brief:

Russian Army Concentrates on Big Cities: The Ukrainian general staff announced on Sunday morning that the main focus of the Russian offensive, which has been ongoing since February 24, is still the encirclement of the cities of Kiev, Kharkiv in the east and Mykolaiv in the south. Russian units attempted to penetrate the southwestern outskirts of Kyiv.

They were also approaching the highway from the Kiev suburb of Brovary to Boryspil, where Kiev's international airport is located. According to the Ukrainian army, Russia plans to capture the dam of the Kaniv hydroelectric power station about 150 kilometers south of Kyiv on the Dnipro River.

Selenskyj calls for battle: President Selenskyj called on his compatriots in a video message to drive out the Russian troops. "We have to go outside! We have to fight! Whenever there's an opportunity," he said. As in Cherson, Berdyansk or Melitopol, the Ukrainians should go outside "and drive this evil out of our cities". In the past few days, there have been reports from the aforementioned Ukrainian cities that ordinary, unarmed people have opposed Russian units. 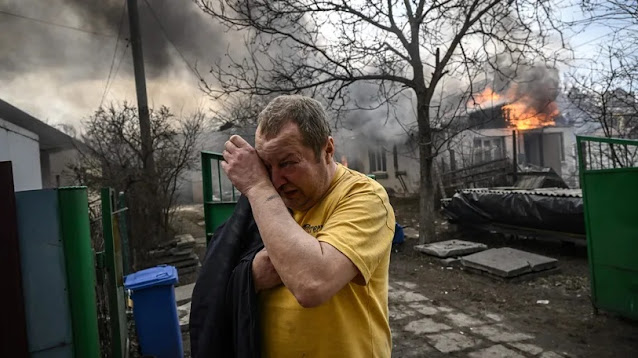 Israel is trying to mediate: Attempts at international mediation in the war currently seem to be of little use. Israeli Prime Minister Naftali Bennett traveled to Moscow on Saturday for talks with Russian President Vladimir Putin. According to Israeli sources, the meeting lasted three hours. Bennet also phoned Zelenskyj. Results were not known. Bennet then came to Berlin for a one-and-a-half hour talk with Chancellor Olaf Scholz.

Afterwards, the German government spokesman Steffen Hebestreit only said that the common goal remained to end the war in Ukraine "as quickly as possible". "We will work on that with all our might." US President Joe Biden also spoke to Zelenskyy on the phone.

Economic pressure on Russia: The USA, the EU and other western partners had imposed tough sanctions on Russia since the beginning of the war. Another blow from the private sector followed: the world's two largest credit card providers, Visa and Mastercard, suspended business with Russia.

Visa said it would stop all transactions in the coming days. After that, cards issued in Russia would no longer work abroad. Mastercard made a similar statement. Both companies had previously stopped processing transactions for Russian banks affected by international sanctions.

Tens of thousands of Ukrainian refugees in Germany: Before the war, tens of thousands of people continue to flee across the Ukrainian borders to the European Union every day. About 830,000 made it to Poland alone, tens of thousands to Germany. Interior Minister Nancy Faeser (SPD) promised to accept people regardless of nationality and without an upper limit. "We want to save lives. It doesn't depend on the passport," Faeser told Bild am Sonntag. "The vast majority of the refugees are Ukrainians. People from other countries who already had a permanent right of residence in Ukraine bring this status with them."

She cited Indians who studied in Ukraine as an example. Faeser called the European cooperation in caring for the refugees "historic". The Saxon Prime Minister Michael Kretschmer (CDU) called for better coordination within Germany. The United Nations refugee agency expects 1.5 million refugees by Sunday evening; never before have so many people fled a war zone in such a short time.

Blinken travels to Moldova: US Secretary of State Antony Blinken is expected in the capital Chisinau after his meeting with Ukrainian Foreign Minister Dmytro Kuleba for consultations with NATO ally Moldova. Further negotiations between Ukraine and Russia will not take place until Monday.