Russia-Ukraine War: "This Night Could Have Been The End Of Europe" 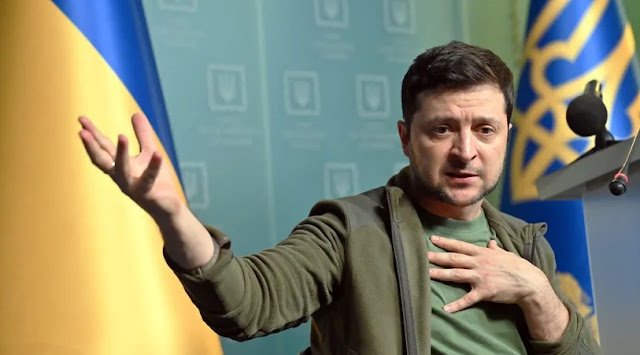 After Russian troops shelled a nuclear power plant, Volodymyr Zelensky called for protests in Russia. He recalled the Chernobyl disaster.

Ukrainian President Volodymyr Zelensky has called on Russians to protest after the attack on the Zaporizhia nuclear power plant in southern Ukraine. "You have to take to the streets and say you want to live, you want to live in a world without radioactive contamination," he said in a speech. "Radioactive radiation doesn't know where Russia is, radiation doesn't know where your country's borders are."

Only a few hours earlier, a building caught fire during the Russian attacks on the nuclear power plant complex, which has since been extinguished. "Tonight could have been the end of Ukraine, the end of Europe," Zelensky said. Had the reactor blocks been hit, the damage would have been six times greater than after the Chernobyl disaster, he said.

"Russian people, I appeal to you, how can this be possible?" Said Zelenskyj in the language of his addressees. "After all, we fought together against the Chernobyl disaster in 1986." The worst nuclear accident in human history occurred at the Chernobyl power plant in northern Ukraine. A nuclear meltdown released large amounts of radioactivity, and thousands of people had to leave their homes.

The area around Chernobyl is still uninhabitable today because of the radiation, the power plant is less than 100 kilometers from Kiev. During the advance towards Kyiv in the first days of the war, Russian troops also attacked in the Chernobyl zone.

Now is not the time to remain silent, said the Ukrainian president. "You must remember the glow over the destroyed power plant." In a video he recorded that night, he accused the Russian military of terrorism. "Russian propagandists threatened everyone to turn them into nuclear ash," he said. "It's no longer a threat, it's reality."

According to Ukraine's nuclear agency, the Zaporizhia power plant is now under the control of the Russian military, but will continue to be operated by Ukrainian personnel. No critical components were hit during the attack, and the radiation levels around the power plant are not in the dangerous range.