Russia-Ukraine War: The Latest Developments In The Ukraine-Russia War 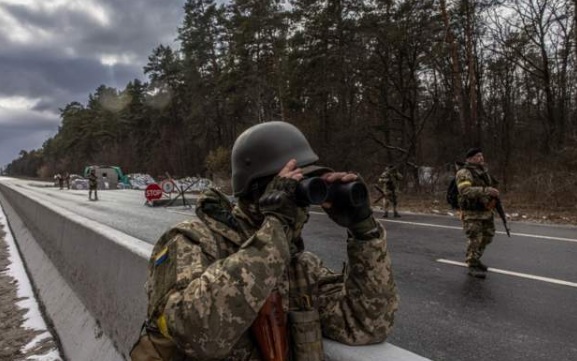 It's been 14 days since the Russian invasion of Ukraine. According to the latest situation so far:::::::

At around 6 a.m., several explosions were heard in the Ukrainian capital, Kiev, while emergency sirens were sounded in various cities across the country in anticipation of a possible air strike.

Ukraine says safe evacuation of citizens from northeastern city of Somi has been completed. The Russian army has laid siege to the city of Somi and has been shelling it for the past several days.

In a historic speech to the British Parliament, Ukrainian President Zelensky reiterated his commitment to "fight to the last."

He quoted Winston Churchill as warning Russia that "we will fight in the forests, on the plains, on the beaches and in the streets."

US President Biden has imposed a complete ban on Russian gas, coal and oil imports into the country.

The United Nations says 2 million people have been displaced from Ukraine so far, including about 800,000 children.

And this is the biggest refugee crisis in Urum since World War II.

World-renowned companies such as McDonald's, Starbucks and Coca-Cola have closed their operations in Russia.

Fitch, the world's largest debt and resource rating company, has warned that Russia could soon go bankrupt because of its debt as it slashed the value of Russia's securities bonds. Has been added to the category. Fitch Ratings has downgraded Russia to its lowest level since the day before, even lowering its investment rating.

This is another blow to Russia's ability to repay its debt in the face of economic sanctions imposed as a result of the invasion of Ukraine. This week, Moscow said its debt repayment agreements could be affected by economic sanctions. Fitch's announcement comes at a time when the United States and Britain have banned oil imports from Russia.

Ukraine's deputy prime minister says the coastal city of Mariupol is trying to evacuate its citizens through six humanitarian routes. In a video message, he said the Ukrainian armed forces had agreed not to shell the area for the next 12 hours. He also called on the Russian military to abide by the ceasefire agreement reached at the local level.

The news comes at a time when Ukraine has managed to evacuate 5,000 people from its besieged city of Somi. Ukrainian authorities had earlier accused Russia of shelling humanitarian evacuation routes in Mariupol. However, it is unknown at this time what he will do after leaving the post. Ukraine rejected the offer.

1.33 million refugees from Ukraine have already arrived in Poland

On Tuesday alone, 125,800 people crossed the border, according to the Polish border guard on Twitter. About 93 percent of the refugees are Ukrainian citizens. The mayor of the eastern Polish city of Przemyśl told the PAP news agency that his city is currently experiencing a slight drop in the flow of refugees. Most recently, around 35,000 refugees arrived within 24 hours, and the number has been between 40,000 and 45,000 in the past few days. There are two border crossings with Ukraine in Przemyśl, and trains from Odessa, Lviv and other Ukrainian cities also arrive there.

According to statements by the Russian Foreign Ministry, the attack on Ukraine should not lead to the overthrow of the government. The operation is going strictly according to plan, says ministry spokeswoman Maria Zakharova. Ukraine's neutral status should be achieved through talks.

It is hoped that the next round of negotiations will bring progress in this regard. According to the information, around 140,000 people have fled from Ukraine to Russia so far. The Russian leadership continues to refer to the war as a "special military operation". The Ukrainian government was already open to neutral statusshown - but made a truce a condition.

China is sending aid to Ukraine

According to the Chinese government, it has provided aid worth the equivalent of 720,000 euros. A first delivery, including food and everyday necessities, was sent to the Ukrainian Red Cross on Wednesday, Foreign Ministry spokesman Zhao Lijian said. More to follow as soon as possible.

China has now again rejected strong economic sanctions against Russia. "The application of sanctions at every turn will never bring peace and security, but will seriously affect the economies and livelihoods of affected countries," Zhao said. The two countries would continue their usual trade relations.

The capacities for additional oil production are limited. In the USA, during the Corona crisis, there was at times so little demand for oil that some fracking companies went bankrupt, and there were also logistical challenges. The most dangerous sanction to date in the import ban – for US President Joe Biden, but also for the global economy.

China criticizes US import ban on energy from Russia

China has criticized the US import ban on oil, gas and coal from Russia as a reaction to the Ukraine war. It will only cause major difficulties for the affected countries' economy and people's well-being, said China's foreign ministry spokesman Zhao Lijian.

"Everyone loses from this scenario, and sanctions only increase division and confrontation."

Wielding the big stick of sanctions will not bring us peace and security. China's foreign ministry spokesman Zhao Lijian

China and Russia have maintained good cooperation in the field of energy. "We will continue normal trade cooperation," the spokesman said. China will take "all necessary measures" to resolutely defend the legitimate interests of Chinese companies and individuals.

China opposes any unilateral sanctions and an extension of the US side's jurisdiction beyond American territory, said Zhao Lijian. In dealing with the Ukraine issue and Russia, the US should take China's concerns seriously and avoid undermining China's rights and interests.

The EU member states have decided to introduce new sanctions against Russia and Belarus. Other oligarchs and their families are said to be on a list of people whose assets are frozen in the EU and who are no longer allowed to enter the country. A ban on the export of shipping equipment and the exclusion of three Belarusian banks from the Swift communications network are also planned. Even after a decision by the USA, the EU countries were unable to agree on renouncing energy imports from Russia.