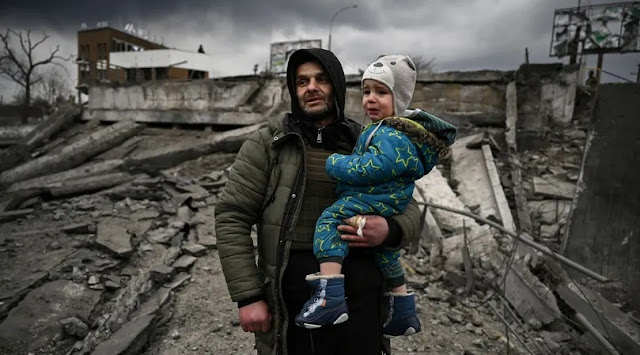 According to the government, the capital is without water, gas and electricity. US President Joe Biden warns of a third world war. The main events of the night.

Experts fear a major attack on the Ukrainian capital of Kiev in the near future. From the point of view of the USA and independent experts, the military column in front of the capital was not dispersed, but re-positioned; this is also shown by new satellite images.

At the same time, the Russian army is expanding its offensive in the east of the country. On Friday they attacked the industrial city of Dnipro for the first time. According to the rescue workers, several civilian buildings were bombed, at least one person was killed. The situation is still particularly dramatic in the port city of Mariupol. Meanwhile, the United States and its allies announced new trade sanctions against Russia.

The Ukrainian head of state Volodymyr Zelenskyj spoke on Friday of a "humanitarian catastrophe". In Kyiv and other cities there is no electricity, no gas, no water. Russia wants to "destroy" Ukraine and is also using "Syrian murderers" to do so, he warned. Russian President Vladimir Putin had previously approved the deployment of 16,000 "volunteer" fighters in Ukraine, mostly from the Middle East.

Zelenskyj made an appeal to the mothers of Russian soldiers. "Don't send your children to war in a foreign country," he said in a video message. "Ukraine never wanted this terrible war." But his country will defend itself against the Russian attack.

The Russian army has recently significantly expanded its offensive in Ukraine: In addition to Kiev and Mariupol, Russia is targeting several cities in the center and east, the Ukrainian military said. The Russian army is also bombing the cities of Lutsk and Ivano-Frankivsk in the west of the country. On Friday, Russia also attacked the eastern industrial city of Dnipro for the first time. According to the rescue workers, the airstrikes hit several civilian buildings, including a kindergarten and a shoe factory. At least one person was killed.

According to Ukrainian sources, mayor Ivan Fedorov was kidnapped by Russian soldiers in the occupied southern Ukrainian city of Melitopol.

The situation in Mariupol, which has been surrounded by the Russian army for more than ten days, is particularly dramatic. According to local authorities, at least 1,582 people have been killed since the siege; the International Committee of the Red Cross (ICRC) reported catastrophic conditions for the approximately 300,000 civilians still trapped in the city. The aid organization Doctors Without Borders warned of an "unimaginable tragedy".

The capital is now also in a "state of siege," said presidential adviser Mykhailo Podoliak on Friday. Kyiv is "ready to fight" and will "stand firm to the end," he tweeted. The north-western suburbs of Kiev have been shaken by heavy airstrikes for days. In the meantime, the Russian army is also approaching the capital from the north-east. The Ukrainian General Staff warned that the Russian army was trying to knock out defenses in the regions west and north-west of the capital in order to "blockade" Kiev.

According to the UN, 2.5 million people have now fled the country, plus two million internally displaced persons.

At their summit at the Palace of Versailles, the EU heads of state and government discussed further aid for Ukraine. EU foreign policy chief Josep Borrell proposed doubling military aid to the country to €1 billion. According to several summit participants, this met with cautious approval.

The West is planning further sanctions against Russia. US President Biden announced that the US and its G7 partners and the EU would withdraw Russia's status as a "most favored nation". Such a move would pave the way for tariff impositions and further trade restrictions.

The USA also announced further import and export bans in trade with Russia and Belarus. Meanwhile, Biden reiterated that the United States and its NATO partners "would not wage war against Russia in Ukraine." "A direct confrontation between NATO and Russia is World War III," he said.