Russia-Ukraine War: Explosion In Kyiv, Air Raid Near Kharkiv - The Overview Of The Night 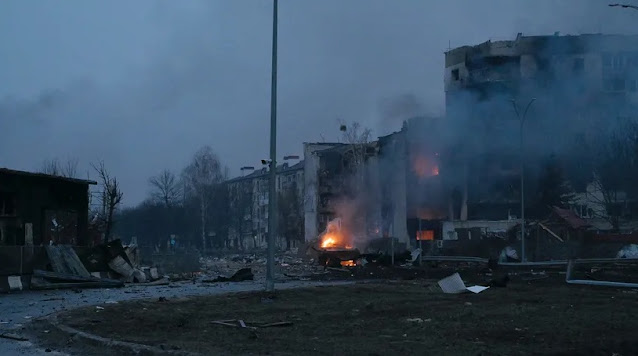 The capital reports detonations. According to the authorities, eight people died near Kharkiv. In Cherson, Russian troops apparently achieve success.

Several heavy explosions occurred in the Ukrainian capital of Kiev overnight. According to the Ukrainian news agency Unian, an air raid alarm was triggered. The residents were called on to seek protection immediately, it said.

Powerful detonations were seen on videos shared on social networks . At first it was unclear whether it was an air raid and what the goals could have been.

In the eastern Ukrainian city of Izyum near Kharkiv, the authorities reported eight dead, including two children, after an airstrike. According to media reports, a multi-storey residential building was hit during the night attack. The information was initially not independently verifiable. Two rockets hit an administration building in the city of Kharkiv. The Assumption Cathedral is said to have suffered damage that is not described in detail. Nothing was initially known about injuries.

In the south of the country, the regional administration confirmed the capture of the port city of Kherson by the Russian army. Russian occupiers are in all parts of the city and are "very dangerous," according to a statement. Kherson is the first major city that Russia has captured since invading Ukraine a week ago. Fighting continued in the port city of Mariupol. Mayor Vadym Boitschenko reported continuous Russian shelling. The power supply has been damaged. "Today was the hardest of all seven days of the war," Boichenko said.

In a video speech, Ukrainian President Volodymyr Zelenskyy gave a positive assessment of the course of the war. "We are a people who destroyed the enemy's plans within a week," he said. Referring to the Russian soldiers, he added:

A military observer from the Organization for Security and Cooperation in Europe has been killed in a Russian attack on Kharkiv. She died "while getting supplies for her family," the organization said.

The International Criminal Court has opened an investigation into war crimes in Russia-invaded Ukraine. Prosecutor Karim Khan said the collection of evidence has "started now".

According to the UN, a million people have already fled the attacked country since the beginning of the Russian invasion. More and more war refugees from the Ukraine are also arriving in Germany.

The World Bank stops all its programs in Russia and Belarus. The aid projects would be "discontinued with immediate effect," the financial institution announced.

The UN General Assembly has condemned the attack on Ukraine by a large majority. 141 states voted for a corresponding resolution. 35 countries abstained, only five rejected the decision.

According to civil rights activists, 724 people were arrested during new anti-war demonstrations in Russia. Rallies were held in 25 cities.

French President Emmanuel Macron is calling for a reorganization of European defense. Europe can no longer be dependent on others, but must invest more in its own independence, he demanded.