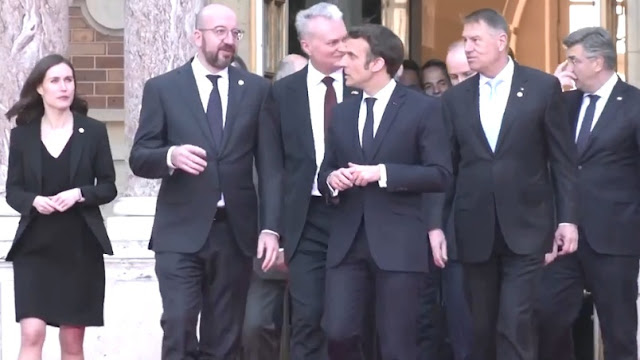 Several countries rule out the fast-track membership demanded by the government in Kyiv. The EU cannot open "accession procedures with a country at war".

During their summit in the French city of Versailles, the 27 heads of state and government of the EU states rejected the idea of ​​Ukraine joining the European Union quickly. France, the Netherlands and Luxembourg, among others, had previously excluded the rapid membership demanded by the government in Kyiv.

French summit host Emmanuel Macron stressed that the EU could not open "accession procedures with a country at war". In view of the Russian invasion of his country, Ukrainian President Volodymyr Zelenskyy applied for EU membership at the end of February.

In a joint statement, Chancellor Olaf Scholz and his European colleagues pointed out that the EU Commission would be tasked with examining Ukraine's application for EU membership as soon as possible. The ties to Ukraine should be further strengthened and the country supported. "Ukraine is part of our European family," said the heads of state and government.

After the deliberations of the heads of state and government, Dutch Prime Minister Mark Rutte emphasized that there was no shortcut to the accession process. "This would be a slap in the face for Montenegro, for Serbia and Albania and North Macedonia, which have waited so long to be included in the accession process," he added. "No one can join the EU overnight," said Croatian Prime Minister Andrej Plenkovic.

The Ukrainian ambassador in Berlin, Andriy Melnyk, said: "It's not about getting membership tomorrow. We don't want a free ticket. But we want that to happen in an urgent procedure, within a few years." Joining the European Union is a year -long process that all EU states have to agree to. Poland, Slovenia and other Eastern European EU countries are calling for clear accession prospects for Ukraine.

During their deliberations, the EU states promised extensive help to all war refugees from Ukraine and called on Russia to enable civilians to escape safely. "The EU and its member states will continue to show solidarity and provide humanitarian, medical and financial assistance to all refugees and host countries," it said in a statement.

The EU states also promised the people of Ukraine political, financial, material and humanitarian support. "We will not leave them alone," reads the official statement. It is also ready to provide assistance in rebuilding a democratic Ukraine as soon as the Russian attack has ended.