Russia-Ukraine Conflict: What Is The Kinzhal Hypersonic Missile, Which Russia Claims To Have Used In Ukraine, And How Does It Work? 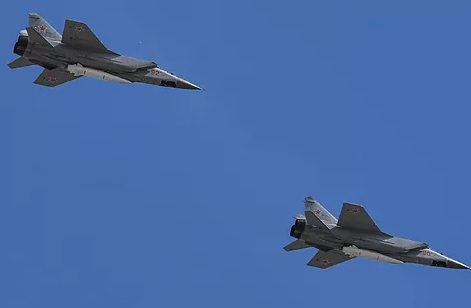 The Kinzhal hypersonic missile can be launched from a fighter or bomber, has a speed ten times greater than the speed of sound and a range of 2,000 kilometers.

In addition to artillery bombardment, during the war in Ukraine, the Russians rely on new weapons. The Defense Ministry announced on Saturday that Russia has used a Kinzhal hypersonic missile for the first time to destroy a Ukrainian underground missile depot.

A "large underground repository of missiles and aerial ammunition" has been destroyed in the Ivanko-Frankovsk region, said the ministry's spokesman, Igor Konashénkov, in his daily appearance. Russian Kinzhal hypersonic missiles were used in the operation, he added.

WHAT IS THE KINZHAL HYPERSONIC MISSILE

The weapon can be launched from a Tu23 fighter or bomber, has a speed ten times greater than the speed of sound and a range of 2,000 kilometers. It can also be fitted with a nuclear payload, but in this case they are limited to a conventional warhead. The main characteristic of the Kinzhal missile, apart from "speed", is maneuverability, thus making it much more difficult to intercept.

Anti -aircraft defense -provided the appropriate means are available- has short reaction times. In addition, the sensors with which the device is equipped ensure greater precision. In 2018, analyzes already emerged that affirmed that the system could represent an important novelty in Putin's arsenal, being one of the many superweapon projects presented by Kremlin propaganda.

In early February, a Mig 31 equipped with the missile was reported in the Kaliningrad region. A sighting that was intended to send a message to the Baltic countries and Poland.

WHAT DOES ITS USE IN UKRAINE IMPLY

Now, the use of the missile in the Ukraine conflict can be read in different ways: it is proof that they are prepared to use any weapon (in recent days the news about the use of cluster and thermobaric weapons had spread); they avoid exposing the fighters (they have lost many, in fact they use many cruise missiles); they hit the "enemy" with a "rare" device, never used, against which the defenders can do little; and it represents a diversion from critical analyzes towards the behavior of the Russian Army amidst delays and problems.

Although the bombs and rockets raining down indiscriminately on populated centers in Ukraine are deadlier and the destruction they are causing is devastating.

Once the Russian offensive was met with opposition from the resistance, Putin has given way to the usual scorched earth or scorched earth tactic, the only way to wipe out cities that won't surrender.