Russia-Ukraine Conflict || Volodymyr Zelenskyi's Speech: It's Not About Us 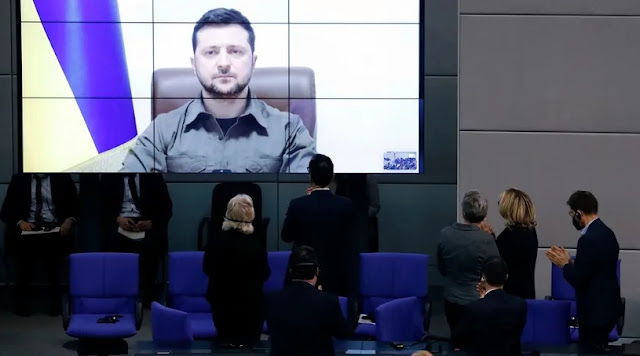 Volodymyr Zelenskyi accuses Germany in a speech - the German reacts with bickering on the agenda. It's embarrassing, but other things are important.

There is one thing you can rely on in this country: that even the most fundamental issues can be reduced to a level that Germans are used to. Even the war thus becomes material for German routines and sensitivities. The way the Bundestag dealt with the historic speech by Ukrainian President Volodymyr Zelenskyi on Thursday morning was a low point in parliamentarian.

You really don't want to waste a lot of words about the fact that the coalition has not put a debate, government declaration or at least a short break on the agenda - if only as a signal that it is doing something with the German people's representatives, which Selenskyi is currently accusing them of Has. And you certainly don't want to talk big about the subsequent agenda debate on the initiative of the Union, in which CDU parliamentary group leader Friedrich Merzinto a non-partisan pose in order to gain party political ground.

One would have liked to roll one's ears inward so as not to have to hear all the bickering about who was to blame for the agenda and who was particularly unworthy (always the others). You really don't want to take any of this seriously, because then you give in to the temptation to view and treat everything only through the lens of German sensibilities and quarrels. It's about time we got rid of this selfishness. Our agendas are not important, nor is our outrage.

Is Germany living up to its responsibilities?

Unfortunately, however, there is a larger question hidden in this spectacle, which has nothing to do with the agenda itself, and which Selenskyi also poses in his historical, accusatory speech in repeatedly modified form: Will Germany live up to its responsibility in this war ?

No one can do justice to war itself. Therein lies its terror, its inhumanity: that it cannot be reduced to a level that is bearable for body and mind and made manageable. He also threatens to destroy those who, like Zelenskyi, have decided to meet him as heroes. But Selenskyi has found his role – Germany has not.

For days, the Ukrainian President has been touring virtually through the parliaments of his allies, the day before yesterday he was in Canada and yesterday in the US Congress. There he was demanding, but also grateful. In Germany he accuses.

"How can it be that a country across the ocean is closer to us than a country in Europe?" he asks, referring to the United States. Germany has always only focused on "economy, economy, economy," he says - which is a polemical, but in retrospect quite accurate description of the priorities of German Russia policy. And Zelenskyi has again brought an image that fits the country in which he speaks.

The day before he had adapted Martin Luther King's " I have a dream " to " I have a need " for the US MPs". But his picture for the German listeners is bleak: "There is a wall again. It's not a Berlin Wall. There is a wall in the middle of Europe between freedom and bondage, and this wall gets bigger with every bomb that falls on us, with every decision that is not made even though it could help us."

He criticizes "how many connections your corporations still have with Russia, with a country that uses you and others to finance the war". Though criticize is the wrong word, he delivers it with practiced incredulity. Because it's not new, it was already the case with Nord Stream 2, whose support from Germany Selenskyi describes as "cement for the new wall". And he asks, "How can that be?"

Yes, how can that be? Zelenskyi, the Ukrainian Jew, grabs the Germans where it hurts the most: their historical responsibility. "Every year the politicians repeat: 'Never again' and now we see that those words just don't mean anything." From the point of view of Ukraine, and probably also from the point of view of many other countries, that is also what is at stake now: Germany's place in history and keeping the promise that this country has been making for decades: to do everything to ensure that not repeated that evil which emanated from Germany.

Selenskyi no longer has to spell out what this "everything" means, everyone knows it: not a single euro more from Germany to Russia, be it for gas, petrol or whatever. a no-fly zone, as he called for it in the US Congress the day before, Selenskyi does not even address it in the Bundestag. This is also a sign that he expects little from the largest European country.

It is therefore not decisive how the Bundestag debates this Thursday. Whether the Union deliberately instigated the agenda squabbling after agreeing to the process the day before, as the Greens and FDP say. All political groups contribute to the devastating picture that Parliament paints. Zelenskyi will not care.

However, one argument with which the traffic light coalition defended the agenda is worrying: that it is now the norm. That after the speech of a foreign head of state in the Bundestag there was never any other debate.

If we've always done it this way, let's keep it up! This shows exactly that sluggish routine that German politics was supposed to overcome after the self-declared "turn of the era". Not just on agendas, but where it really counts.

The government will now have to show what it is willing to expect of the Germans in order to support the Ukrainians in the struggle for freedom that has been applauded in this country for three weeks now. That morning, shortly after Selenskyi's speech, Chancellor Olaf Scholz met the NATO Secretary General in Berlin.

The day before, Foreign Minister Annalena Baerbock had explained in the Bundestag what the federal government is planning for those fleeing Ukraine. Economics Minister Habeck wrestles with how much energy crisis the Germans can endure. That's what it's all about: what the Germans are really willing to endure in order to do justice to "Never again" to the best of their conscience.

Selenskyi did his part with this blunt, almost brutal speech. When the parliament stands up to applaud him at the end, the Ukrainian President stands up after a few seconds and switches off the transmission. He has better things to do than listening to the Germans busy themselves.