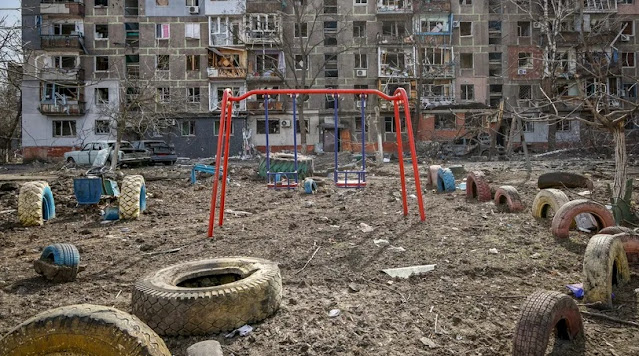 Russia had asked the troops in Mariupol to surrender. That is not an option for Ukraine. The US President will travel to Poland.

Ukraine has rejected an ultimatum to hand over the besieged port city of Mariupol to Russian forces. "There can be no question of surrendering weapons. We have already informed the Russian side about this," Deputy Prime Minister Iryna Vereshchuk told the Ukrainska Pravda newspaper. "There will be no surrender, no laying down of arms." Asked the Russian military to open a humanitarian corridor to the port city.

Russia had given Ukrainian forces in the besieged port city until 4 a.m. Monday night to surrender. Russia is calling on Ukrainian soldiers "and foreign mercenaries to cease hostilities, lay down their arms and go to Kyiv-controlled areas through humanitarian corridors agreed with the Ukrainian side," said the head of Russia's National Defense Control Center Mikhail Mizintsev. The Russian Defense Ministry said that residents of the city of Mariupol could leave until 9 a.m. if the defenders surrendered.

The Russian Ministry of Defense addressed the authorities in Mariupol on the Internet service Telegram: "You are the ones who now have the right to make a historic decision - either you are on the side of your people or you are on the side of the criminals." The Ministry threatened: "Otherwise, the court-martial that awaits you is but a small part of what you have already earned for your contemptible attitude towards your own citizens, as well as for the horrible crimes and provocations you have committed."

Mariupol is the last major port city on the Sea of ​​Azov under Ukrainian control. More than 2,100 residents of the city have been killed since the Russian invasion began on February 24, according to the Ukrainian government. The situation for the people of the besieged city is catastrophic.

The other events of the night at a glance

At least four people were killed when several buildings in the west of the Ukrainian capital Kiev were shelled late Sunday evening. According to Mayor Vitali Klitschko, several apartment buildings in the Podil district were damaged and set on fire in the attack . A shopping center was also hit.

In a chemical plant in the city of Sumy in north-eastern Ukraine, highly toxic ammonia leaked out on Monday morning for reasons that are still unknown . The regional military chief Dmytro Schywytzky appealed to all residents within a five-kilometer radius of the chemical plant to go to the basement or apartments on the ground floor if possible.

The CDU/CSU parliamentary group is calling on the federal government to do more to deal with the influx of refugees from Ukraine. "Due to the lack of willingness on the part of the federal government to act, there is a risk of losing control if the number of refugees increases," said CSU regional group leader Alexander Dobrindt of the Rheinische Post.

US President Joe Biden plans to travel to Poland on Friday. Biden will initially attend the NATO, EU and G7 summits in Brussels this Thursday as planned, the White House said. A meeting with Polish President Andrzej Duda is then planned in Poland.