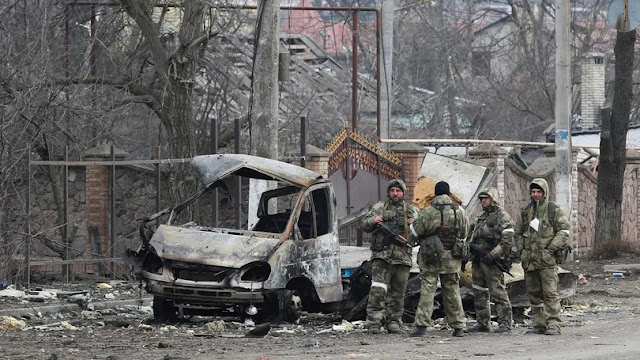 Ukraine cannot agree to a dirty peace, but the negotiators are still optimistic. But victory is only possible if Putin loses.

If the Ukrainian president is correct, then Russia "has already begun to understand that it will not achieve anything by going to war." Who wouldn't want to believe that? Before the continued round of negotiations between delegations from both countries, Volodymyr Zelenskyy said in a video message that the talks were going "quite well". And the Russian President Vladimir Putin recently spoke of "positive progress," even though his troops incessantly bring the horror of war to the Ukrainians, day and night.

The Russian soldiers are hardly gaining ground anymore, which says nothing exonerating about the deadly terror with which they are covering the neighboring country these days: bullets and rockets at residential areas in besieged cities, health facilities, civilian infrastructure in general and also at people fleeing - with them with the aim of breaking the resistance.

There is no question that this war has reached a crucial point, or at least is close to it, with the faltering advance of Russian troops. "We're at a crossroads," is the assessment of the Ukrainian presidential adviser Alexei Arestovych between the current rounds. "Either we will agree on the current talks or the Russians will launch a second attempt (an offensive) and then there will be talks again." The negotiations this Tuesday, in which the Ukrainian side continued to press for a ceasefire and the withdrawal of Russian troops, once again failed to achieve a presentable result.

So where does the optimism that parts of the Ukrainian leadership are spreading come from? Arestovych says, at least in some concrete terms: "I think we should have a peace agreement by May, early May, maybe much earlier, we'll see." And what would an agreement look like that both sides could accept? How should a compromise be possible between the complete withdrawal of the attackers and the surrender of the victims? Zelenskyy has long since come to terms with the fact that Ukraine will not become a NATO member in the foreseeable future: "That is the truth and we have to recognize it," he said again. But no one can believe that Putin is primarily concerned with a "neutral" Ukraine. So the room for negotiation remains small.

However, the Ukrainian presidential adviser Ihor Zhovkva reported again on Tuesday evening that the talks had become "more constructive". "In the first rounds, Russia was not willing to listen to our position, but issued ultimatums: that Ukraine surrender, lay down their arms, that our president sign a surrender." Now Russia speaks “in a slightly different tone”. The Ukrainian delegation remains "cautiously optimistic", but a breakthrough can only be achieved with the participation of the two presidents. Late in the evening, Ukrainian negotiator Mykhailo Podoliyak reported on difficult talks that are set to continue on Wednesday. There are fundamental antagonisms between the two sides.

In the meantime, the Ukrainians are doing their best to avoid giving the impression that they could soon embark on a dirty peace that would at least freeze the situation, that is, one that would accept Russian control over parts of the country, even if only temporarily.

Especially since that would actually be dangerous for the aggressor. It would be exactly what would help Vladimir Putin militarily right now: some rest to resupply and improve deployment of his troops, including meanwhile recruited fighters from Syria, Chechnya or elsewhere, while he can consolidate what has been achieved and prepare for the next steps.

Attempts to consolidate political control in the conquered communities are already evidence of this, starting with mayors and other authorities who are abducted and ending with possible referendums at gunpoint that could legitimize occupied territories as supposedly independent republics - at least in the parallel world of the Kremlin. From this point of view, a new pretext for the next offensive would quickly be constructed and made up. Then it would probably soon be said again: We have to secure the peace and protect the people from the regime in Kyiv, special operations and so on.

As in any existential war, a viable diplomatic solution will only be possible if there is nothing left to gain militarily for either side - or only to lose. Millions of Ukrainians have already fled. But as long as the remaining fighters can somehow keep themselves on their feet, they will defend their country. Ukraine will hardly make the mistake of allowing itself to be pressured from outside to reach an agreement like the Minsk Agreements, which would impede real sovereignty in its country for years and would not permanently avert the danger from the neighborhood – unless it was absolutely necessary, without guarantees.

However, the point at which surrender becomes inevitable can come at any time. The fall of Ukraine as a state, the subjugation of a European nation - the Russian president seems willing to continue to seek the triumph of his dream empire on the battlefield. It may be as Chancellor Olaf Scholz put it in Turkey: "With every passing day, with every bomb, Putin is moving further away from the world community." But only when he has finally lost will everyone else win. The pain he needs to see it comes from relentless sanctions and the Ukrainian army, as long as it gets all the support the West can muster. Both must remain until Ukraine is really free – which, by the way, would also be desirable for Russia.