Russia-Ukraine Conflict: Russian Soldiers Pushed Out Of Kiev, Zelenskyj's Offer To Negotiate, Biden's Warnings - The Overview In The Night & Morning 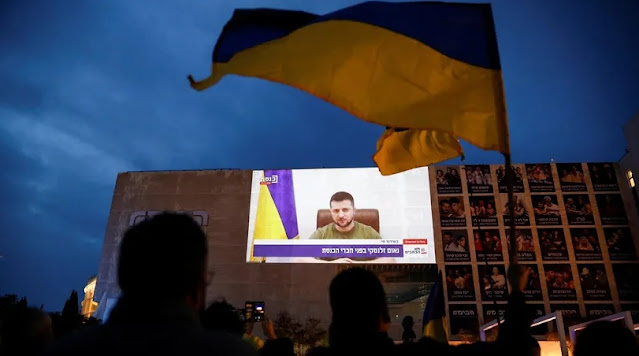 According to their own statements, the Ukrainian military has defended an important suburb of Kiev. After fierce fighting, the Russians were forced to leave Makariv, the Ukrainian Defense Ministry said. This prevents Russian troops from encircling the capital Kyiv from the north-west.

Ukrainian President Volodymyr Zelenskyy has announced that he will let his people decide on any possible "compromise" in the negotiations with Russia. The terms of a possible deal could mark "historic" changes, the head of state said in an interview with news website Suspilne.

The Ukrainian side will ultimately decide on this in a referendum. "The people will have to vote on certain forms of compromise. And what that will look like depends on our talks with Russia," he said. He insisted on a face-to-face meeting with his Russian colleague Vladimir Putin.

In exchange for a ceasefire, a withdrawal of Russian troops and security guarantees for his country, he would be willing to talk about Ukraine's renunciation of NATO membership, Zelenskyy said. Kyiv is also ready to discuss the status of Russia's annexed Crimea and the pro-Russian separatist-held Donbass in eastern Ukraine after a ceasefire and steps towards security guarantees.

US President Joe Biden warns against the use of biological weapons

US President Joe Biden meanwhile warned of Russian cyber attacks in the US and the use of chemical and biological weapons in Ukraine. The Russians would "claim that Ukraine has biological and chemical weapons," Biden said. This is "a clear sign" that Russian President Vladimir Putin is "considering the use of both weapons".

The news of the night in brief:

The Russian newspaper Komsomolskaya Pravda, which is close to the Kremlin, published high numbers of allegedly killed Russians in Ukraine and later deleted them again. An online article Sunday, citing the Defense Ministry, said 9,861 Russian soldiers had died since the war began. That would be significantly more than the 498 dead that Moscow has officially confirmed so far. According to the Ukrainian account, almost 15,000 Russian soldiers have been killed since the beginning of the war.

In the face of increasing violence against civilians, President Zelenskyy has called on his compatriots to resist Russian troops and to persevere. "To save our people. Fight. Fight and help!" The head of state, who was staying in Kyiv, called for the "invaders" to be expelled. "So that Ukraine lives, and all of us together with her, free and in peace."

The US Department of Defense believes that Russian troops in Ukraine are deliberately targeting civilian targets. Department spokesman John Kirby said: "We continue to see indiscriminate attacks on civilians and we believe that in many cases this is premeditated." Ukraine is also making allegations against the Russian military: According to Zelenskyj, the army is said to be shooting at demonstrators in the city of Cherson.

The Ukrainian counterintelligence has stopped a possible assassination attempt on President Selenskyj according to its own statements. A group of Russian saboteurs, led by an intelligence agent, were arrested in the city of Uzhhorod, in the border triangle between Ukraine, Slovakia and Hungary, Unian agency reported.

Apparently in anticipation of Russian attacks, the mayor of Boryspil has called on civilians to leave the city. Volodymyr Borisenko said his appeal also applies to all civilians who have fled to the city south-east of Kyiv from other parts of Ukraine. The appeal for evacuation was made for purely military-tactical reasons.