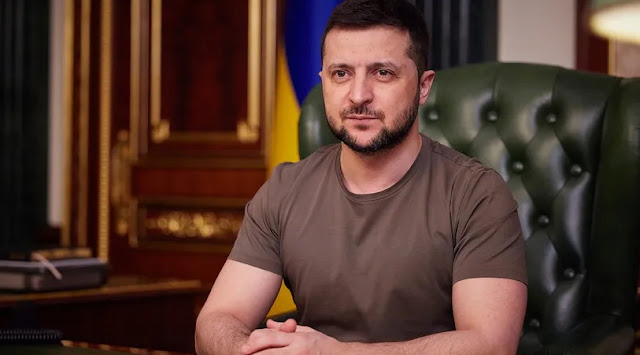 Russian media have spoken to the Ukrainian President, the media regulator warned of the consequences of publication. A news portal does it anyway.

Despite warnings from the Russian media regulator Roskomnadzor, the Russian news portal Meduza has published an interview with Ukrainian President Volodymyr Zelenskyy. In the hour -and-a-half video conversation, Zelenskyy once again called for the withdrawal of Russian troops from Ukrainian territory. Meanwhile, the Ukrainian head of government has accused Russian President Vladimir Putin of delaying the peace talks.

Only after the Russian armed forces have withdrawn can there be security guarantees for Ukraine, Zelensky said. These in turn are the basis for the NATO renunciation of Ukraine demanded by Russia. The question of the neutrality of the country demanded by Russia will be examined thoroughly. At the same time, the head of state renewed his announcement that ultimately only the Ukrainian citizens would be able to decide on this in a referendum.

The Russian media regulator Roskomnadzor had previously tried to prevent the interview from being published. "Roskomnadzor notifies Russian media of the need to refrain from publishing the interview," the agency said. All of the media that conducted the interview are to be screened to determine "the extent of responsibility and response actions." The Russian Prosecutor General's Office announced a "legal assessment of the content of the published statements".

Various Russian media representatives were involved in the interview, including a reporter from the well-known Moscow daily newspaper Kommersant and the news portals Doschd and Meduza, whose pages have already been blocked in Russia.

Meduza published the interview on his website, which can still be reached via alternative internet connections and from abroad. A question was also asked on behalf of the editor-in-chief of the opposition newspaper Novaya Gazeta, Dmitry Muratov. After the agency's threats, neither Kommersant nor Novaya Gazeta published Zelensky's statements.

In Russia, the invasion of Russian troops in Ukraine can officially only be described as a "military special operation". In addition, a new media law provides for up to 15 years in prison for alleged false reports about Russia's armed forces.

The media regulator also published its latest warning on Telegram. There she exchanged a Z in her otherwise Cyrillic name for the Latin letter and now runs the channel under the name RoskomnadZor. The Z is a symbol used by pro-war advocates and stands for "Za Pobedu" - "For Victory".