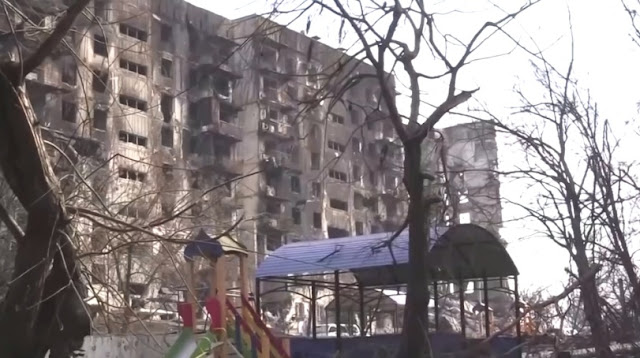 45 buses are coming from Kyiv to evacuate residents, Russia has committed to a ceasefire. Around 160,000 people are still trapped in Mariupol.

The Ukrainian government has dispatched 45 buses to bring people from the besieged port city of Mariupol to safety. Earlier, Russia had pledged to observe a ceasefire along the route from Mariupol to Zaporizhia to the north.

During the night, the Ukrainian government was informed by the International Committee of the Red Cross (ICRC) that "Russia is ready to open access for humanitarian convoys from Mariupol," Deputy Prime Minister Iryna Vereshchuk said in a message published on Telegram.

Therefore, now the buses would be sent to the "corridor" from Mariupol. The Russian Defense Ministry announced a ceasefire for the southern Ukrainian city on Wednesday. This should make it possible to evacuate civilians. The ceasefire was to begin at 10 a.m. local time. Wereschuk initially described the announcement from Moscow that night as another attempt at Russian "manipulation".

According to Moscow, the corridor will lead through the city of Berdyansk, which is under Russian control, to Zaporizhia, which is held by Ukrainian forces. The Ukrainian army must also ensure the security of the bus convoys in which the civilians are to be transported, the Russian Defense Ministry said. "Our military guarantees a complete ceasefire," Vereshchuk said.

Mariupol is heavily shelled by Russian forces. The city has now been largely destroyed, but around 160,000 residents are said to be still stuck there - about a third of the population before the war. The humanitarian situation in the city is catastrophic.

At least 5,000 people have been killed there since Russian attacks began more than a month ago, according to Ukrainian sources. According to the city council, most buildings in the city have been destroyed, people are hiding in basements and are cut off from electricity and water supplies. The Ukrainian news portal Hromadske published aerial photos showing destroyed houses and other civilian buildings in the city.

According to Ukrainian and British sources, Mariupol will continue to be shelled. A Red Cross camp was also damaged in the Russian shelling. This was shown by satellite images from Planet Labs, which the AP news agency evaluated. The recordings documented several holes in the roof of the building, which according to the images had been marked with a red cross since at least August 2021. The ICRC distributed all supplies from the warehouse in early March and no staff have been on site since March 15, the organization said.

Previous escape corridors have also become the target of attacks, for which both sides blame each other. Last week, Ukraine also accused Russian troops of seizing bus drivers and rescue workers on the way to the city. Civilians mostly managed to escape from the city in private vehicles.

However, there are hardly any roadworthy cars there, and there is also a lack of fuel. The communication links are also broken, Russian air and artillery attacks were also aimed at the radio infrastructure. The few reports from the city point to catastrophic conditions. United Nations observers have received information about mass graves in the city.

According to its own statements, Russia is also evacuating people from occupied districts. According to Ukrainian information, these are kidnappings. Thousands of people have been forced to board buses that take them to Russia or the separatist areas in eastern Ukraine.

There they are said to be housed in camps against their will. Most recently, the city administration condemned the forced evacuation of mothers and staff from a maternity ward to Russia. In addition, thousands of children were kidnapped from the separatist areas to Russia. The information cannot be independently verified.